A novel method in which a chiral catalyst forms first one, then later the other enantiomer of a molecule has been developed by chemists in China. The researchers believe it could potentially allow access to both enantiomers of novel pharmaceutical molecules through the same synthesis route. 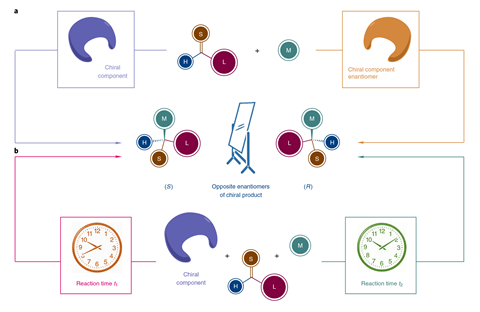 As living organisms are homochiral, they often interact very differently with one enantiomer of a molecule than another. In drug development, for instance, this means that both enantiomers therefore have to be investigated. One simple strategy for preparing the opposite enantiomer is to flip the chirality of the reactants or catalysts, but biologically-derived molecules are sometimes readily available in only one enantiomer. Organic chemists have therefore devised subtler strategies involving the preferential reactivity of one enantiomer towards a chiral catalyst or reagent, producing a mixture of enantio-enriched target product and either unreacted reagent or by-product.

Now Shu-Li You and colleagues at the Chinese Academy of Sciences in Shanghai demonstrate a more sophisticated strategy. They performed an asymmetric intermolecular allylic amination between 6-hydroxyisoquinoline and racemic tert-butyl carbonate – a reaction catalysed by the (S) enantiomer of a chiral iridium complex, using methanol as their solvent. To their surprise, they found that, whereas after six minutes the reaction produced the (S) enantiomer of the target amine in 94% excess, when left for 10 hours, the reaction gave a 98% excess of the (R) enantiomer.

Further mechanistic investigation showed that the chiral iridium complex catalyses the rapid production of the (S)-amine from the (S) enantiomer of the tert-butyl carbonate. However, on longer timescales, it also catalyses its decomposition to an ether. The 6-hydroxyisoquinoline is released back into solution.

The (S)-iridium complex is a far less effective catalyst of the reaction of 6-hydroxyisoquinoline with the (R) enantiomer of tert-butyl carbonate, so the (R)-amine forms much more slowly. However, it is also less effective as a catalyst of its decomposition, so the (R)-amine accumulates at high purity over long timescales. The researchers showed several related reactions where a similar strategy was effective. ‘So far this is the first example in asymmetric catalysis in which you can use time as the controlling factor for enantio-switching,’ says team leader Shu-Li You, ‘We can tell you with more research how widely it can be applied.’

‘I think it’s conceptually really interesting,’ says synthetic organic chemist Eric Ferreira of the University of Georgia in the US. ‘It’s more important as a proof of principle than in any directly applicable aspect.’ He says he would like to see a similar reaction scheme demonstrated in a system where only one enantiomer of the catalyst is readily available. ‘If you could apply it there,’ he says, ‘I think that could be very useful.’