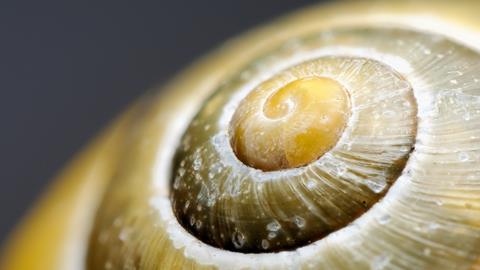 An unusual catalytic system makes chiral molecules with greater enantioselectivity when the catalyst itself is used in a less enantiopure form. It may be the first ever example of a so-called ‘hyperpositive’ nonlinear effect (NLE) in asymmetric catalysis.

Metal complexes with chiral ligands often induce enantioselectivity during catalytic reactions. Usually, you would expect to see a linear relationship between the enantiopurity of the catalyst and the product. For example, if you used a 50:50 mixture of catalyst enantiomers, you would expect the products to also show a 50:50 mixture of enantiomers. As you increase the enantiopurity of the catalyst, you would also expect the products to be made in higher enantioselectivity.

‘Sometimes this [relationship] is not linear – you can have what we call a positive or negative nonlinear effect,’ explains Stéphane Bellemin-Laponnaz, who investigates catalytic systems at the University of Strasbourg. ‘A positive NLE is basically when you have a catalyst that has low enantiomeric [purity] but still gives the same enantiomeric excess in your product as you would have when using the enantiopure catalyst.’

Bellemin-Laponnaz and his co-workers have now discovered a counterintuitive reaction where the products are produced in higher enantiomeric excess by a near-racemic catalyst, than when just a single enantiomer of catalyst is used. The catalyst system involves a chiral ligand based on the stimulant drug ephedrine, which promotes enantioselectivity during the addition of dialkyl zinc reagents to aldehydes. The team believe it is the first ever example of a ‘hyperpositive’ NLE – something that was predicted to exist by the catalysis pioneer Henri Kagan more than a quarter of a century ago. 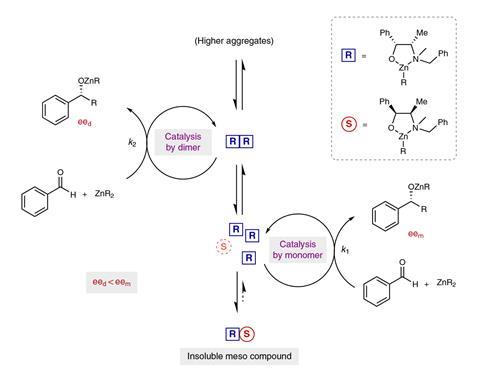 At higher temperatures more of the catalyst exists as a monomeric species, and the team showed that when the reaction is performed at higher temperatures, the enantiopurity of the product also increased – another unusual phenomenon for a catalytic reaction.

‘This is a new, spectacular example of nonlinear effects in asymmetric catalysis,’ says Konstantin Bryliakov, an expert in NLEs, based at the Boreskov Institute of Catalysis in Novosibirsk, Russia. However, Bryliakov questions whether it is truly a hyperpositive NLE and wonders whether the phenomena described in the temperature studies might be a result of ‘isoinversion behaviour’, with another unidentified stereoselectivity-determining step involved. Bryliakov also believes that some aspects of the study point to an asymmetric autoinduction taking place – where the product itself influences the catalytic species as the reaction progresses. According to Bryliakov, this means that a ‘dynamic NLE’ could be the true source of the results.

Despite these reservations, Bryliakov is impressed by the findings. ‘Hopefully, this work will be an inspiration for researchers working in the area of nonlinear effects in asymmetric catalysis, as well as those focused on the problems of the origins of biological homochirality and hence the origins of life, the complex and largely nonlinear phenomenon, in general,’ he says.