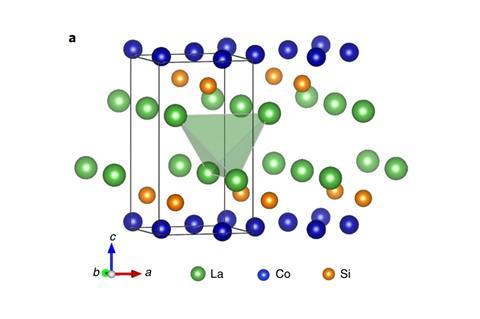 Structure of the lanthanum–cobalt–silicon catalyst

Rather than relying on ammonia made by the energy-hungry Haber–Bosch process, local fertiliser synthesis could soon be possible with a catalyst that can break the nitrogen–nitrogen triple bond at ambient pressure.

Ammonia, one of the key ingredients in fertilisers, is made on a huge scale by the only reaction that can reliably break the strong dinitrogen bond: the Haber–Bosch process. However, the reaction needs extreme conditions – pressures of around 20MPa and temperatures of at least 400°C – which requires specialised equipment and a lot of energy. Currently, the Haber–Bosch process makes around 140 million tonnes of ammonia per year, consuming around 2% of the world’s energy output in the process.

However, a discovery made by a team led by Hideo Hosono and Junjie Wang from the Tokyo Institute of Technology, Japan, could one day cut down on those sizeable energy requirements: a lanthanum–cobalt–silicon (LaCoSi) catalyst that can break the nitrogen–nitrogen bond at ambient pressure. At 400°C, the catalyst is 10 times more efficient at making ammonia under the same conditions as its closest competitor, a cobalt–molybdenum nitride. The only other catalyst that comes close to LaCoSi’s performance contains the rare and expensive metal ruthenium.

LaCoSi is one of a family of intermetallic compounds that contains a rare earth, a transition metal and a p-block element. In this setup, cobalt is very electron-rich, which allows it to break stable bonds such as the H2 or the N2 bond. This means the rate-determining step isn’t the sluggish and energy-intensive nitrogen dissociation.

‘The activation energy of ammonia synthesis was the lowest among many reports so far,’ says Hosono. LaCoSi’s secret is a curious ‘hot atom’ mechanism: the energy released during adsorption of nitrogen on the catalyst’s surface helps break the triple bond.

‘Comparatively, the catalyst reported in this work may not be as efficient as the iron- and ruthenium-based catalysts used in industry, albeit it outperforms some of the cobalt-based catalysts,’ says Ping Chen, an expert in low-temperature ammonia synthesis at the Chinese Academy of Sciences. ‘I’m anxious to see if there are any real showstoppers, either with regards to synthesis or scale-up or compatibility with current systems,’ adds University of Michigan, US, chemical engineer Levi Thompson.

Nevertheless, Thompson calls Hosono and Wang’s work ‘pretty exciting’. ‘Tackling low temperature ammonia synthesis is one of those holy grails of chemistry,’ he says. The Tokyo scientists are now working on larger scale experiments, for which they need to improve the catalyst’s surface area.

‘It’s a very interesting piece of work in a very important area that is becoming increasingly topical,’ agrees Justin Hargreaves, catalytic materials researcher at the University of Glasgow, UK. ‘With the increasing availability of renewable sources of hydrogen, there is a desire to generate ammonia on more localised scales, for example for local fertiliser production or for energy storage,’ he adds. ‘I think [this study] will stimulate more activity.’