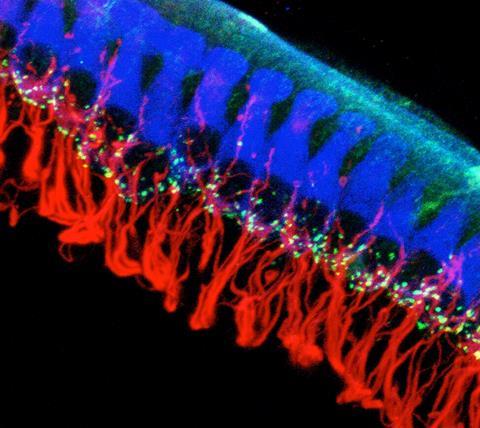 A small region of mouse cochlea that has fluorescently labelled. Blue highlights the auditory sensory cells or hair cells. The red are the fibres or axons of the cochlear nerve cells extending out to contact the hair cells. The bright green dots are the points where the fibres contact the hair cells and are the synapses that are sensitive to high levels of glutamate, such as that released by noise. A team from the University of Iowa has found that a small molecule that acts on these synapses can prevent hearing loss in mice caused by loud noise

Hearing loss caused by loud or prolonged noise could be prevented by a compound that could act like a set of chemical ear defenders – without blocking out sounds altogether.

The cochlea is the ear’s hearing organ. It’s an intricate neuromechanical device. The two cell types responsible for getting the sensation of sound to the brain are hair cells – tiny projections from cells that move in response to vibrations, generating an electrical response – and neurons, which transmit the information from the hair cells to the brain.

During this transmission process, the electrical response of the hair cells triggers the release of glutamate. Glutamate-sensitive proteins on the neurons initiate an electrical signal that is then sent to the brain.

Loud or sustained noise, however, can damage this system by causing the hair cells to release excessive glutamate. The louder the sound, the more glutamate is released, which obstructs and interferes with the synaptic transmission of sound to the brain. ‘There is no way right now to repair noise damage to the ear – whether it is damage to synapses or damage to the hair cells – neither of them will regenerate naturally,’ says Steven Green from the University of Iowa.

Green and his team has found that the primary case of the trauma leading to synaptic damage is over-activation of a particular class of calcium-permeable glutamate receptors. They showed that administering the selective inhibitor for this class of glutamate receptor, IEM-1460, to mice prevents hearing loss when the animals are exposed to noise. ‘The innovative thing about this compound is that, since it’s selective just for the calcium-permeable receptors, you can take it and be protected but still be able to hear,’ says Green.

Green cautions, however, that there are many hurdles to overcome before this compound could be used in humans, including improving the delivery method. To administer the compound in the study, the researchers had to surgically inserted a tube into the mice’s cochleas. This would be unacceptable for most people, and oral administration would be the preferred route. The potential side-effects also need to be addressed in further animal studies. ‘This compound would get into the cochlea, but it could also get into the brain and could it cause issues there?’ Green asks.

Green is hopeful that the findings will eventually help provide protection for those entering noisy environments – like military personnel, workers in loud industrial settings and even DJs in nightclubs.

Sharon Kujawa, who directs audiology research at Massachusetts Eye and Ear at Harvard Medical School, agrees that this new work is important and timely. ‘The better we understand the details of synaptic communication between hair cells and auditory nerve fibres when the cochlea is healthy, and the changes that occur when synapses are injured by noise or other insults, the better position we will be in to target them for protection or repair,’ she says.