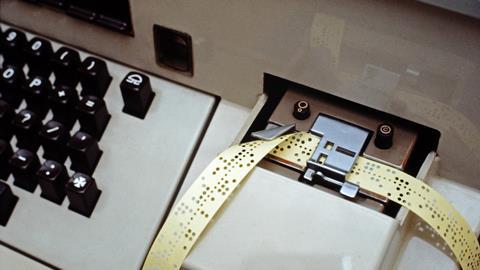 Chemists have created a molecular ratchet that acts as a simple chemical Turing machine. It consists of a macrocycle reading out chirality information as it moves along a molecular thread.

A Turing machine reads and writes symbols on memory tape while moving back and forth on the tape. Its actions are controlled by rules that define what to do for each combination of its current state and symbol that it is reading. It is an abstract description of computation that, while simple, is capable of implementing any computer algorithm. While there are DNA-based Turing machines, completely synthetic molecular versions don’t exist yet.

A rotaxane version of a finite-state machine has now been created by David Leigh’s team at the University of Manchester, UK. A finite-state machine is a less sophisticated Turing machine. It can only read, but not write, symbols and its reading head can only move in one direction. It’s a first step in the direction of molecular computers, in which logic operations are performed through reactions.

The rotaxane automaton consists of a crown ether – the reading head – threaded onto a molecular strand – the memory tape – with three compartments separated by a removable barrier. The barriers are opened by a pH pulse in the form of a strong acid that quickly decomposes, closing the barriers again. What pushes the ratchet forward and stops it from going backwards is a higher binding affinity to the next compartment site.

The first and last compartments contain chiral binding sites, each a mirror image of the other. The middle one is achiral. Although the crown ether is achiral, it adopts a chiral arrangement when interacting with a chiral binding site. The machine’s state can be read out by the circular dichroism response in the chromophore built into the crown ether’s structure. The output is a string of trits (ternary digits), with –1 denoting R stereochemistry on the binding site, +1 for S and 0 for an achiral interaction. But encoding even higher-order digits may be possible with differently sized and shaped asymmetric binding sites.

To convert the rotaxane device into a Turing machine that can write information as well as read it, the researchers suggest that the reading head’s conformational changes could catalyse a stereoselective reaction. This would be akin to the way nature stores and reads information using mRNA transcripts and ribosomes.