Synthesising maitotoxin is one of the hardest chemistry challenges out there

How many chemists does it take to synthesise a molecule? The answer is 20, at least when it comes to maitotoxin, quite possibly the toughest total synthesis challenge around. With 32 rings and 98 stereocentres, maitotoxin is the largest and most complex natural product that is neither a protein nor a polysaccharide, consisting mostly of fused cyclic ethers. Now, after eight years of research, KC Nicolaou and his group from Rice University, Texas, US, have almost completed its total synthesis. But the completion of possibly the greatest chemical challenge out there now faces a funding crisis that has halted the synthesis just as the finishing line is in sight.

Maitotoxin’s physiological effects have been known for decades. It can cause ciguatera, a common form of seafood poisoning that can result from eating Pacific Ocean coral reef fish. Scientists isolated the compound from the gut of the striated surgeonfish – maito in Tahitian, hence the molecule’s name – but later found that it is not the fish producing the neurotoxin but the plankton species Gambierdiscus toxicus, that surgeonfish feed on. However, maitotoxin’s chemical structure remained elusive until, in 1993, Japanese researchers isolated minute amounts of the mystery molecule from cultured G. toxicus and fully characterised it by two- and three-dimensional nuclear magnetic resonance.1

In 1996, Nicolaou and his group, buoyed by their success with similar marine natural products such as brevetoxin, set their sights on maitotoxin. Its complexity and particularly its immense size presented an unprecedented total synthesis challenge. ‘Our record of success in the field of ladder-like marine neurotoxins – a class of natural products of which maitotoxin is a member – encouraged us to dare the seemingly impossible task of its total synthesis,’ says Nicolaou. 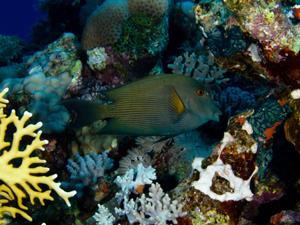 Maitotoxin was first isolated from the striated surgeonfish, although the poison is produced by plankton it feeds on

After having published the synthesis of three small fragments containing three rings each in 1996, Nicolaou’s team left the maitotoxin project on the backburner for a decade. ‘[It] wasn’t at the top of our priorities until 2006, when Gallimore and Spencer2 [at the University of Cambridge, UK] pointed out inconsistencies in the reported stereochemical configuration with the proposed biosynthesis,’ Nicolaou explains. ‘I think he was just waiting for a reason to work on it again,’ says Ross Denton, a former postdoc in Nicolaou’s group. ‘We suspected strongly that the original structure was right – it was like a trigger.’

The group tackled the synthesis of the fragment in question, disproving Spencer’s stereochemical assignment.3 Supported by the National Institutes of Health’s (NIH) marine neurotoxin grant, Nicolaou’s team then completed three more large fragments (see above: ABCDEFG, GHIJKLMNO and C’D’E’F’) between 2007 and 2011.

Throughout their synthetic journey, Nicolaou’s team developed several new strategies for constructing maitotoxin’s numerous cyclic ethers. Steven Ley from the University of Cambridge, UK, who has made his own share of large and complex natural products, highlights the opportunity to discover new reagents and technologies. ‘[Making complex natural products] forces the chemist to discover efficient and robust synthesis procedures,’ he says. ‘It is not just about making a big molecule it is what you learn on the journey.’

Now, Nicolaou and his group have published the formation of maitotoxin’s fourth and final fragment, the 11-ring-containing QRSTUVWXYZA’ domain.4 With all of the major fragments completed, the team is only two side-chains and two rings (P and B’) away from the complete molecule. ‘All we now really need to do is put it all together,’ says Nicolaou.

However, the fragments may remain scattered as funding difficulties have halted the team’s work. ‘Sadly, despite our progress and the chemical and biological significance of this rare molecule, our funding from the NIH on this project was discontinued in 2012,’ Nicolaou says. ‘While we have not given up hope, the change in funding practices in recent years … hinders progress severely along this path of basic research.’

Nicolaou condemns the funding agencies’ short-sightedness, since maitotoxin’s biological effects might lead to new drugs for treating Alzheimer’s and other neurodegenerative diseases. ‘The fragments don’t seem to have the toxicity the whole molecule has, which is very intriguing,’ he points out.

He adds that with sufficient funds and a few talented students or postdocs the project could be completed within two to three years. ‘But I don’t want to make promises,’ he says. ‘Projects like this are not done until they’re done.’

Apart from opportunities for method development and biological investigations, Nicolaou considers the maitotoxin project an excellent training opportunity for young chemists. ‘It taught me a lot about practical organic chemistry and planning synthesis,’ agrees Denton. In 2008 Denton started up his own lab as an organic chemistry lecturer and researcher at the University of Nottingham, UK. ‘I don’t think I could’ve finished my first independent synthesis project if I hadn’t had the experience of working on maitotoxin,’ he says. ‘The amount of different reactions that you experience leads you to be a very experienced chemist on the bench.’ Ley adds: ‘The people who have trained in this discipline of complex molecule synthesis serve society. They make the next generation of functional products and it is they who make the world go round and contribute so much to our healthcare and national economy.’

Nicolaou is grateful for his team’s contributions working on this ‘unique challenge’. ‘20 very capable students and postdocs worked on the maitotoxin project, each of them for more or less than a year,’ he says. ‘I am proud of them for their courage and determination to travel with me where many would not dare venture.’