Chemists complete synthesis of molecule ‘at the limits of complexity’

A team of chemists at the University of Konstanz, Germany, has managed to synthesise one of the most complex natural products ever isolated: canataxpropellane. The research could lead to more efficient syntheses of the taxane family of compounds, which includes the anticancer drug Taxol (paclitaxel).

Taxanes were originally found in extracts of the Pacific yew tree (Taxus brevifolia) and since Taxol’s discovery, over 500 different taxanes have been isolated from Taxus species in a hunt for other medicinal compounds. The densely functionalised structure of canataxpropellane has always tantalised researchers, who wondered how its tighter, more congested scaffold might affect its anticancer activity. However, chemists have never sourced enough to test its bioactivity, and its total synthesis has remained elusive because of the formidable synthetic challenges posed by its structure. 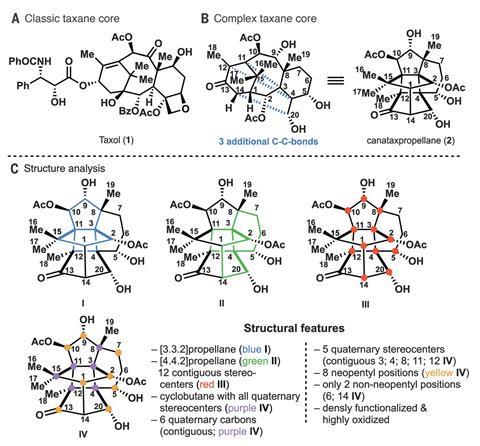 ‘A heptacyclic cage-like structure, twelve contiguous stereocentres, and six contiguous all-carbon quaternary centres – these are each significant challenges in and of themselves,’ explains Sadie Otte, from Claremont Colleges in California in the US, who was not involved in the work. Phil Baran, at Scripps Research in La Jolla, US, adds that ‘compounds with this level of functionalisation not only are challenging from a planning standpoint, the actual execution is always stymied by problems, from unanticipated reactivity to selectivity issues’.

Now, the team led by Tanja Gaich has prepared the intricate taxane in just under 30 steps. Gaich explains that overcoming the route’s planning and execution challenges tested the team’s ingenuity and patience: ‘Sometimes, we needed really aggressive deprotection conditions that almost destroyed our molecule, but it was the only way we found around it.’ In fact, the researchers came close to giving up at the very first reaction – ‘finding the precise conditions for that Diels–Alder transformation was quite tedious,’ explains Gaich. ‘The diene we used is very unstable, it either led to decomposition or self-polymerisation.’ 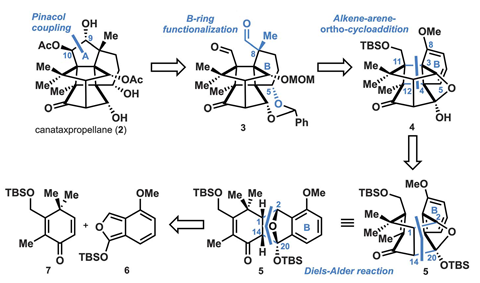 Retrosynthetic analysis of (–)-canataxpropellane. The route’s Diels–Alder first step proved to be a tougher challenge than expected.

The researchers also prepared enantiomerically pure (–)-canataxpropellane. Developing the chiral version of the route took the researchers two additional months in the lab. But this extra challenge also led the team to discover a new chiral directing group for the asymmetric Diels–Alder reaction, when other chirality-inducing solutions – Lewis acids, iminium catalysis – just didn’t work. ‘When we thought of bulky, chiral siloxanes… we hit the spot,’ says Gaich. These protecting groups also allowed the team to separate the two diastereomers using column chromatography instead of HPLC, making multi-gram scales easier to tackle. And obtaining decagrams of some intermediates is key to ‘get canataxpropellane in quantities suitable for biological activity studies,’ explains Otte.

Both Baran and Otte agree that the synthesis is strikingly elegant. ‘Canataxpropellane is at the limits of complexity,’ says Baran, who also thinks ‘this new route gives hope for accomplishing a short and scalable synthesis of taxanes,’ including a more efficient route to Taxol itself.

Canataxpropellane also belongs a family of around 30 cyclotaxanes that have never been prepared before. So the team’s synthesis could become the starting point towards synthesising all these products: ‘We could now selectively fragment some of the bonds to obtain its other ‘cousins’, and hopefully understand the relationship between a constrained structure and biological activity,’ explains Gaich. 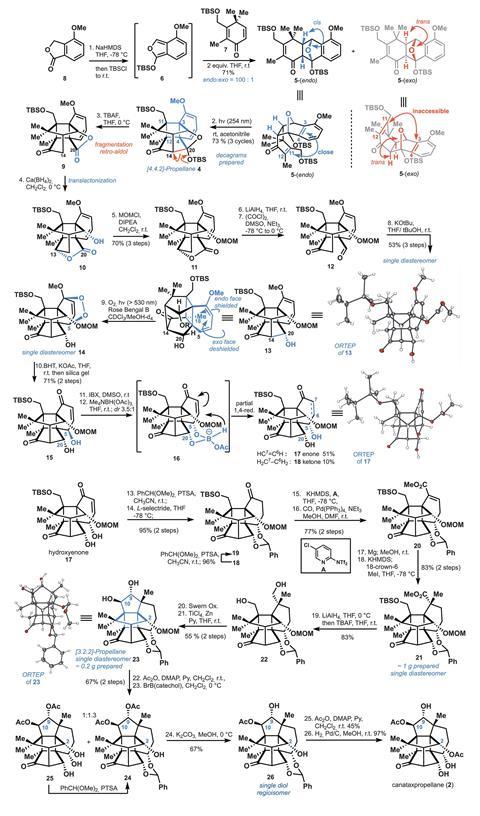