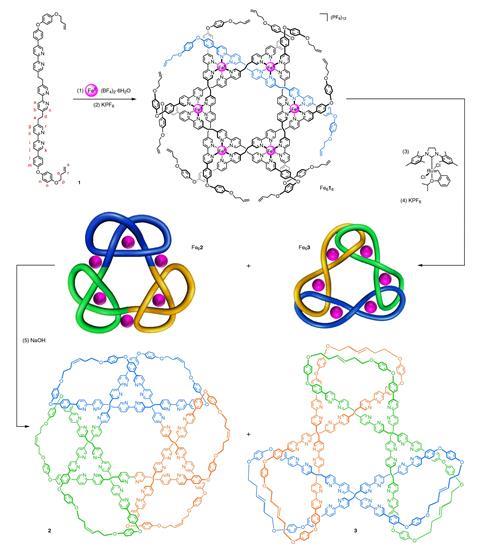 A twisted triple trefoil tangle1 and a molecular granny knot2 have been made by catenane wizard David Leigh and his team from the University of Manchester, UK.

Metal-directed synthesis of a granny knot

Having previously bent molecules into shapes such as a Star of David, the team also holds the Guinness record for creating the world’s tightest knot. Now, they have added four more entries to the molecular knot lexicon: two knots comprising two and three linked figure-of-eights, respectively, a granny knot and a three-trefoil tangle.

The triple trefoil is made of a single, 324-atom-long chain. With a writhe of nine, it is one of the most tangled mechanically interlocked molecule ever made. Writhe is a measure of how coiled a knot is by counting the number of its ‘over’ versus ‘under’ crossings. The knot is so tangled that Leigh’s team needed to protein crystallography methods – which can deal with complex assemblies – to resolve its x-ray structure.

The granny knot and the two-figure-of-eight tangle were made from the same two by two grid – chains of heterocyclic compounds held together by iron ions. A hexameric circular helicate – a star-shaped structure with six iron atoms – formed the basis of the larger catenanes. Stitching together the ends of the grid or helicate molecules then makes the knot. The knot’s final shape depends on which ends connect with each other.

While the two knots don’t have an immediate practical use, applications are starting to emerge. A molecular trefoil knot Leigh’s team created a few years ago catalyses enantioselective reactions.

Tangled structures can also help scientists understand how biological structures coil and uncoil. Viruses, for example, often contain knotted DNA that needs to be unwound before it is ejected through its shell into living cells.