Entwined molecular knot made from catenane crosses at six points

An interwoven molecular knot, shaped like the Star of David – a symbol commonly associated with Judaism – has been synthesised by David Leigh and colleagues at Manchester University, UK.

The Star of David is a six-pointed star, made of two triangles that cross at six places. To make a microscopic version of the star, two molecular links were woven together - forming a catenane - and each joined up in three places. In total, the star consists of six tris(bipyridine) ligands around six octahedral iron (III) centres. To create the structure, the team carried out an olefin metathesis reaction and confirmed the shape of the molecule using spectroscopy and x-ray crystallography.

In previous work, Leigh and his team created a self-tying trefoil knot and used nature as the inspiration for a synthetic version of the ribosome. This new structure, however, follows on from a related study, where Leigh fashioned a pentafoil knot from five ligands and five cations. While the pentafoil knot has five crossing points, with this new star they have succeeded in creating a knot with six crossing points. 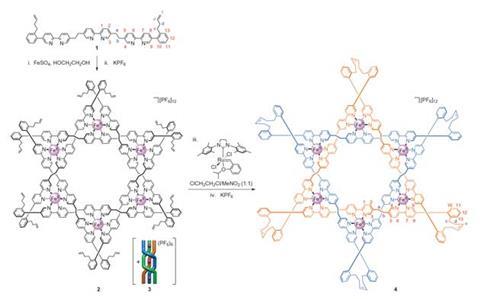 The six-pointed molecular knot is made from two interlinked mlecules