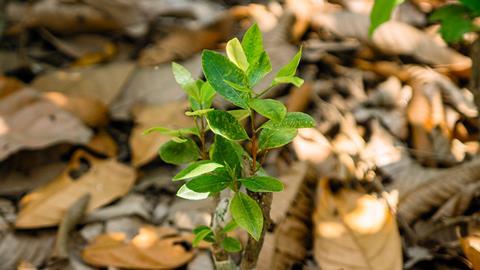 The pathway used by coca plants to produce the tropane alkaloid cocaine has remained a mystery since it was first isolated in 1855. Now, two groups have reported the missing steps in its biosynthesis.

Tropane alkaloids are secondary metabolites produced in multiple species of plants. Cocaine from Erythroxylum coca and nicotine from multiple species in the family Solanaceae are two of the most famous. Others, such as scopolamine, littorine and hyoscyamine are important pharmaceuticals.

Biochemist John D’Auria at the Leibniz Institute of Plant Genetics and Crop Plant Research led a team that used a yeast screening platform to reveal the entire cocaine biosynthetic pathway in E. coca.1 A group led by Sheng-Xiong Huang at the Kunming Institute of Botany in China also independently published a portion of the same pathway.2 The two papers report similar findings but disagree on the ordering of a methylation and ring closure step unique to these heterocyclic tropane alkaloids.

D’Auria has studied this pathway for 15 years and has come to appreciate the unique ways coca plants produce tropane alkaloids. ‘Coca does it differently,’ emphasises D’Auria.

Pathway discovery began with a homology-based approach. This involves finding related plants making similar molecules and looking for similar, or homologous, genes. For coca these plants are in the Solanaceae family, but no homologs exist. D’Auria and PhD student Benjamin Chavez expanded the search, looking for genes coding enzymes that could hypothetically perform the modifications required by the pathway. They narrowed the list of candidates to genes expressed in the tissues that produce cocaine. Surprisingly, they discovered a unique spermidine synthase, EcSPMT, with dual activity. EcSPMT switches between converting putrescine to spermidine, and methylating spermidine. In Solanaceae N-methylputrescine is produced directly from putrescine but coca uses EcSPMT and extra spermidine steps to produce the same N-methylputrescine

‘This has not been reported in literature before,’ says Chavez of EcSPMT, ‘an enzyme that can accept two different cofactors.’ It also suggests that tropane alkaloid synthesis evolved independently in each plant family. 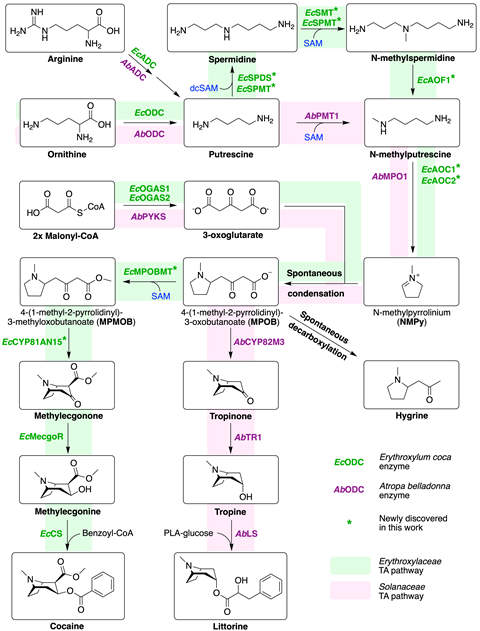 The complete biosynthetic pathway of cocaine

Another key feature of cocaine is its two-ring structure. Creating the second ring involves a methylation and cyclisation step. Both D’Auria and Huang report the involvement of a cytochrome P450 gene, and the same methyltransferase but Huang believes the ring is first closed, producing an unstable intermediate called ecgonone which is then methylated to make methylecgonone. D’Auria says their yeast system shows the methylation occurs first, followed by ring closure.

Till Opatz, an organic chemist at Johannes Gutenberg University in Germany, says both pathways are plausible but the pathway proposed by Huang is ‘a bit counterintuitive’. The compound undergoing these steps contains a β-keto-acid which Opatz explains is prone to decarboxylation. ‘The question is, when is the CO2 released?.’ According to the literature, ‘the release comes prior or happens within the cyclisation’, Opatz adds. However, ‘having run the reaction myself, you find that the carboxylate stays inside and you have to kick it out later’. He says that this is still an open question.

The goal of this work is not cheap cocaine, explains D’Auria. Unique enzymes, like EcSPMT, add to the toolbox of biosynthetic chemistry. He says combinations of genes and enzymes can be trialled and potentially improve on or create unique tropane alkaloids. Using yeast is also a big step for green chemistry, he adds, as it runs on organic waste and completes reactions that otherwise require harsh chemicals and petroleum-based products.