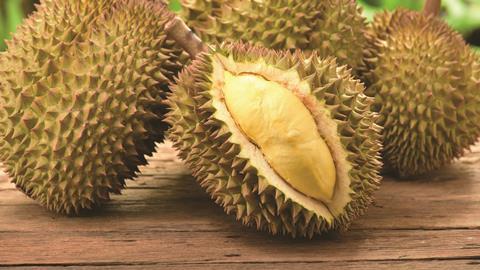 Durian pong can be recreated with fruity and oniony volatiles

The cocktail of compounds that gives the durian fruit its notorious stench has been identified by chemists.

Despite its sweet taste, the durian is legendary for its repellent odour – akin to raw sewage – and has been banned from public transport systems, airlines and hotels in countries where the fruit is native.

Now, a group led by Martin Steinhaus at the Technical University of Munich in Germany has used a combination of GC–MS and aroma extract dilution analysis to try and identify the chemical culprits. They extracted volatile odour compounds from the fruit’s pulp and found 16 that were present in high enough concentrations to contribute to the smell, most of which had characters that were described as either fruity, rotten or reminiscent of roasted onions. However, they went on to show that it only took two particularly potent volatiles – fruity ethyl (2S)-2-methylbutanoate and oniony 1-(ethylsulfanyl)ethane-1-thiol – to mimic the overall odour of the fruit when combined in their natural concentrations.