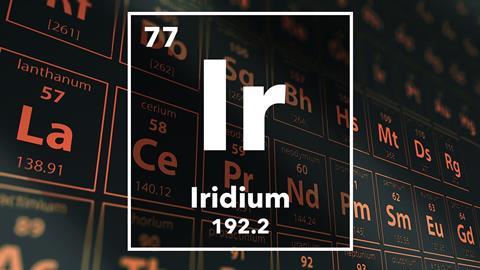 This week a rare, sexy, superhero of an element whose name is a little bit deceiving. Here's Brian Clegg.

There are many reasons to single out an element – in the case of iridium it has to be because it has the sexiest name. It's the sort of name a science fiction writer would give to a new substance that was strong yet beautiful. It's a name that belongs to a superhero of the elements.

So how does the real thing live up to the name? It's hard, certainly, a dense silver-white transition metal of the platinum group, looking a bit like polished steel, but not quite as flashy as the name sounds. It's not iridescent itself. Yet its name derives from the same source. 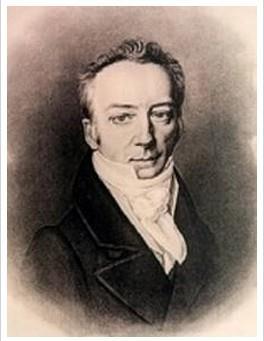 When Smithson Tennant, later professor of chemistry at Cambridge, gave it the name in 1804, he was referring to Iris, the Greek rainbow goddess. He said 'I should incline to call this metal iridium, from the striking variety of colours which it gives, while dissolving in marine acid.' (Marine acid is a variant of muriatic acid, one of the old names for hydrochloric acid.)

Iridium was originally found as a contaminant (with the element osmium) in platinum, and it was from the solid remnants left when platinum was dissolved in a mix of sulphuric and hydrochloric acids that Tennant made his discovery of both elements. He might equally well have named iridium after its weight – it's more than twice as dense as lead, and with osmium it's one of the two densest of all the elements (there is some dispute over which is the heaviest, though osmium usually gets the laurels). Alternatively, Tennant could have reflected on its extremely high melting point, of nearly 2,500 degrees Celsius.

That 'superhero' feel also comes through in iridium's resistance to corrosion. We're used to gold and platinum as the exemplars of metals that stay pure, but iridium fights off corrosion better than either. It was partly for this reason – and the metal's sheer hardness – that iridium was first put to use in alloys to make the tips of fountain pens. Set in gold, these nibs shook off the worst ink and pressure could put on them. To this day you will see fountain pens claiming to have iridium nibs, though in practice it has been replaced by cheaper materials like tungsten. 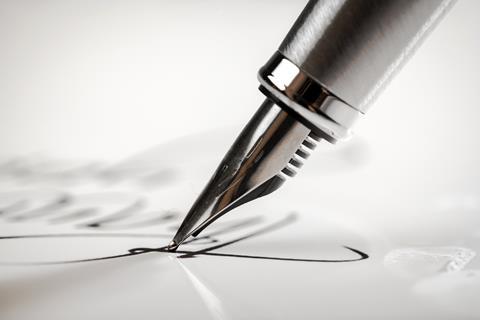 There was only ever a small percentage of iridium in these pens, which is just as well. It's a rare material that makes platinum seem commonplace. There are only about 3 tonnes of iridium produced each year. These days it is more likely to turn up in the central electrode of spark plugs, where its resistance to corrosion and hardness are equally valuable. You'll also find it in specialist parts of industrial machinery.

Iridium, with atomic number 77 and two stable isotopes, 191 and 193, turns up in an alloy with platinum in the standard bar and weight used for many years to define the metre and the kilogramme. The metre was originally one 10 millionth of the distance from the North Pole to the Equator in a great circle running through Paris, but this wasn't a practical measure, so a metal bar was set up to define the length, first in pure platinum, and then from 1889 in the platinum/iridium alloy. Now, though, the distance is defined from the speed of light, permanently fixed in 1983 as 299,792,458 metres per second. As the second is accurately defined by an atomic clock, the metre falls out of the calculation. 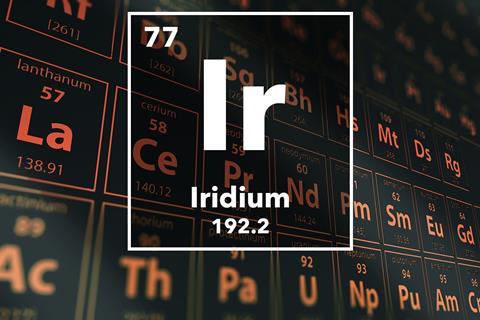 The kilogramme, surprisingly, is still based on the mass of a particular block of platinum/iridium alloy kept in a vault in France, although there is a move for this too to be linked to a more reliable measurement of a natural quantity, such as a fixed number of known atoms. Iridium has also found its way into space, both as a secure container for the plutonium fuel of the nuclear electric generators on long range probes and as a coating on the X-ray mirrors of telescopes like the Chandra X-ray Observatory.

But perhaps iridium's best-known claim to fame is as a clue in a piece of 65-million-year-old Crime Scene Investigation. The concentration of iridium in meteorites is considerably higher than in rocks on the Earth, as most of the Earth's iridium is in the molten core. One class of meteorite, called chondritic (meaning they have a granular structure) still has the original levels of iridium that were present when the solar system was formed. 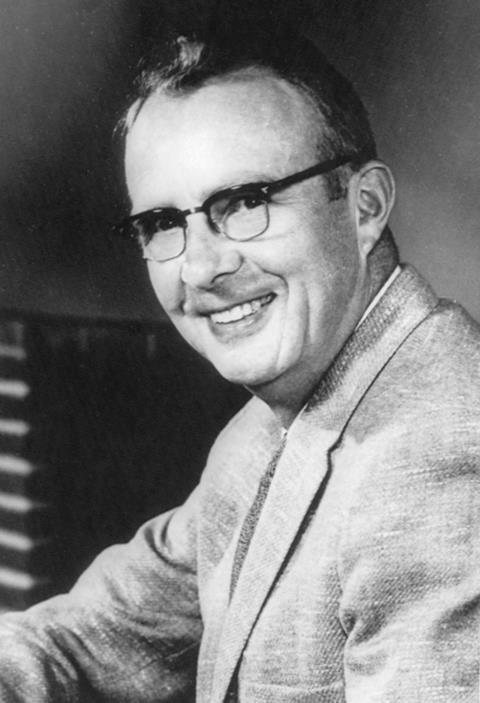 In 1980, a team led by physicist Luis Alvarez was investigating the layer of sedimentary clay that was produced around 65 million years ago, a time of particular interest because this so-called K/T boundary between the Cretaceous and Tertiary periods marks the point at which the majority of dinosaurs became extinct. This layer contains considerably more iridium that would normally be expected, suggesting that there may have been a large meteor or asteroid strike on the Earth at this time.

There is so much iridium present that the asteroid would have to have been around 10 kilometres across – sizeable enough to devastate global weather patterns, bringing about changes in climate that could have wiped out the dinosaurs. It was iridium that provides the principle clue as to why we now believe that so many species were wiped out, leaving the way clear for mammals to take the fore.

In one small way, iridium disappoints. Unlike its oxides, the element itself doesn't display the rainbow hues that its name suggests. But that apart, this is a true superhero of an element: tough, practically incorruptible and, yes, extremely dense.

So, a rare metal that not only has uses varying from fountain pens to telescopes but also helped us understand the extinction of the dinosaurs. That was Brian Clegg brightening up the Periodic Table with the iridescent tale of Iridium. Now next week a colourful element that likes to shed a tear

indium is a soft, malleable metal with a brilliant lustre. The name indium originates from the indigo blue it shows in a spectroscope. Indium has a low melting point for metals and above its melting point it ignites burning with a violet flame. Bizarrely, the pure metal of indium is described as giving a high-pitched "cry" when bent. This is similar to the sound made by tin or the "tin cry", however, neither of them is really much like a cry!

And join UCL's Claire Carmalt to find out what tricks, other than crying, Indium has up its sleeve in next week's Chemistry in its Element. Until then I'm Meera Senthilingam from the nakedscientists.com and thank you for listening.