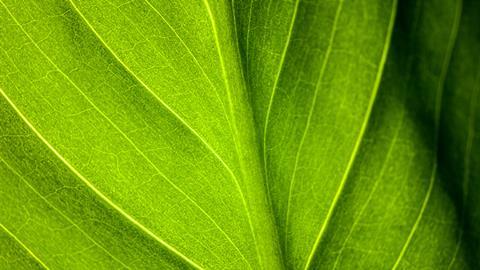 The source of life for virtually every living thing

This week we appreciate the green glow of nature and all the food it provides. Explaining more is Duncan McMillan.

It is truth probably not acknowledged enough, that we owe our existence, and the web of life that sustains us, to food produced by light. At the bottom of nearly every tree of life, from tundra to savannah to coral reef and ocean trench, a photosynthetic organism is doing all the heavy lifting. And the molecule that makes it happen is chlorophyll. 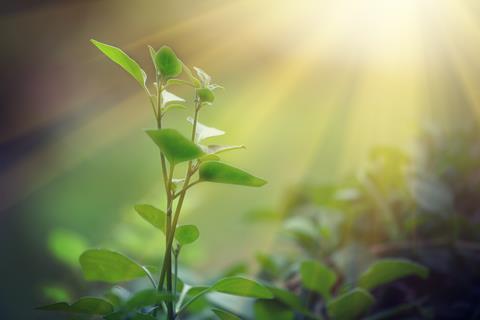 Despite everything we know about it, photosynthesis is a little magical. It helps turn photons into carbohydrates, sun into food. Ancient peoples who worshipped the sun may have been onto something, but maybe they should have made space amongst the gods for little chlorophyll. This compound has effectively built the largest, and longest-living, things from nothing more than air, water, and light.

'Nature has put itself the problem of how to catch in flight light streaming to the Earth and to store the most elusive of all powers in rigid form. The plants take in one form of power, light; and produce another power, chemical difference.'

Nature's little power-converter is a porphyrin ring with a long side-chain. The porphyrin ring, the key constituent of the haem unit in haemoglobin - another of nature's wonder-molecules - contains a single magnesium ion. Porphyrin's arrangement of alternating, or conjugated, single and double carbon-carbon bonds gives rise to a stable structure that absorbs visible light and often - when combined with a metal ion - is brightly coloured. 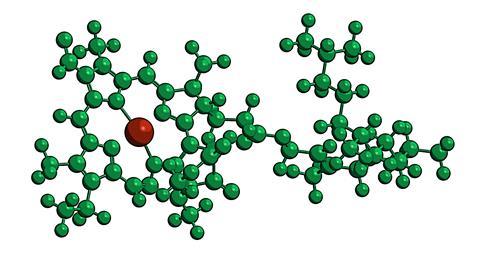 Molecular structure of Chlorophyll A

Chlorophyll's side chain 'tunes' the absorption spectrum of the molecule. The two main types of chlorophyll (a and b) differ in the composition of their side-chains, and in so doing help maximise a plant's light-capturing potential. Whilst a is standard green, b is a bit more yellow. But it's not green and yellow light that they are absorbing. Instead, those colours are 'left behind' after the chlorophyll has absorbed the reds and blues from sunlight.

So chlorophyll pigments give leaves a fresh green and yellow tint. But with the advance of autumn, in many deciduous plants those colours change to red as the plant prepares to shed its leaves and ceases to produce chlorophyll. This reveals other pigments such as carotenoids and xanthophylls, whose rich oranges and browns are the colours of the season.

In plants, chlorophylls are found in the membranes of cellular components called chloroplasts, where they capture the energy of incoming photons by using them to achieve energetically excited states. The chlorophylls are precisely arranged within protein assemblies to allow this energy to be transferred between them; collecting, channelling and focusing the energy to eventually cause an electron to be excited out of a chlorophyll molecule and into a chain of reactions.

The electron's passage through these reactions ultimately produces the chemical energy products that enable the synthesis of carbohydrates from carbon dioxide. And the chlorophyll that originally lost an electron is regenerated by an electron obtained in a process that oxidises water, giving diatomic oxygen as a by-product. Never has a waste product been so useful. 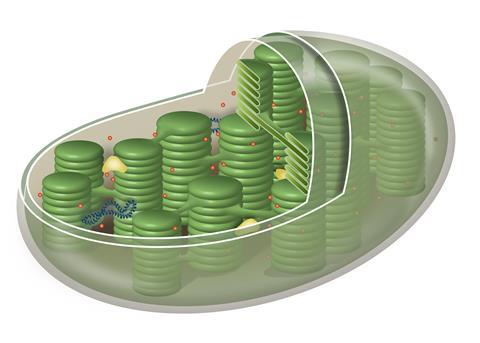 Chlorophylls are found in the membranes of cellular components called chloroplasts

This general process evolved billions of years ago in bacteria and was eventually incorporated into the cells of multicellular plants. Every chloroplast is a throwback to ancient bacteria, taken hostage by plants for their wondrous ability. In fact, our cell mitochondria are reminders of our own acquisitive evolution; mitochondria still contain their own DNA, passed only through the egg cells of the female line.

Now scientists are seeking to hijack photosynthesis for industry and energy. The sun dumps more solar energy onto the earth than we might ever have use for; but even with increasingly efficient solar cells the biggest impediment is storage. Photosynthesis has put the energy from the sun into building chemical bonds, rather than electric potential. Storage is not a problem for photosynthesisers because those bonds build complex sugars. A Glasgow university team is even looking at devising an artificial photosynthesis that could *improve* on photosynthesis - by reducing the complex process to simpler reactions, they hope to get a higher energy conversion than in the humble green leaf.

Despite being the foundation molecule of much of life on Earth and the potential source of literal and figurative 'green' energy riches, some unfair demands have been made on chlorophyll, not least by those who have promoted the molecule as a dietary supplement of uncertain worth.

Instead, it's the little sea slug Elysia chlorotica which gets it right. Its name is a hint of a lifestyle spent, at first, munching algae. Just as early plants incorporated photosynthetic bacteria to feed themselves, so the sea slug swallows the algae's chloroplasts and cunningly incorporates the genes into its own, allowing it to live out the rest of its days powered mostly by the sun. 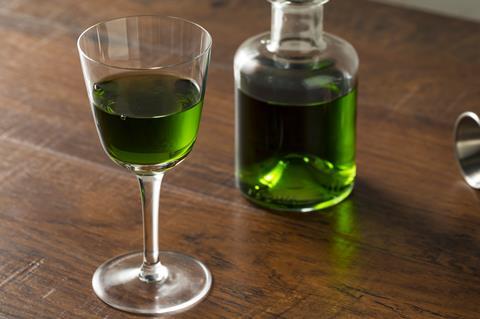 A more enjoyable human use for chlorophyll is as a food colouring, notably in the spirit absinthe. Said to have inspired the likes of Degas, Wilde, Van Gogh, and Hemingway, absinthe at one point was so popular that happy hours became known as 'green hours'.

So chlorophyll is not only the source of life for virtually every living thing, but was a source of inspiration in the lives of some of our greatest artists.

So perhaps a shot of absinthe with your next meal, for some of your own inspiration. That was the RSC's Duncan McMillan with the resourceful chemistry of chlorophyll. Now next week we continue soaking up the sun's rays, but this time in the human body.

A breakthrough came in the 1880s, when a doctor in the north of England, Theobald Palm, suggested that rickets was caused by a lack of sunlight. This proposal was confirmed in 1921 in experiments conducted by two American researchers, Elmer McCollum and Marguerite Davis. They found that they could increase bone growth in rats by exposing them to ultraviolet light, and by giving them doses of cod liver oil. McCollum proposed that the cod liver oil contained a so-called 'accessory food factor' - or what we now term as vitamins. He named this new substance vitamin D.

And to find out the benefits of vitamin D on our body, and the chemistry behind its many forms, join David Lindsay in next week's Chemistry in its element. Until then, thank you for listening. I'm Meera Senthilingam