Mineral never before seen in nature found inside Australian meteorite 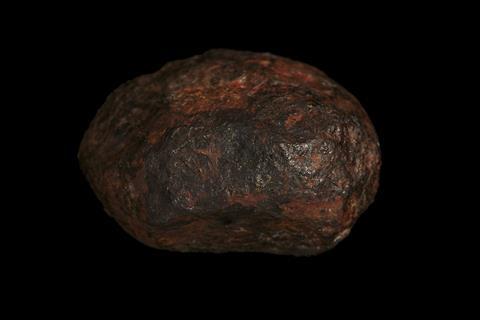 The Wedderburn meteorite that the mineral was discovered in Australia

A new iron carbide mineral has been discovered inside a meteorite found near a former Australian gold mining town 68 years ago. Dubbed edscottite, the material had previously been made synthetically, but this is the first time it has been found in nature – elevating its status to that of a mineral.

Since the discovery of the meteorite near the town of Wedderburn, scientists have studied the small black-and-red meteorite extensively – so much so, that today only a third remains. The rest is now lost to various analyses, which have revealed that the rock contains mostly rare iron–nickel alloys, as well as traces of gold.

Chi Ma from the California Institute of Technology and Alan Rubin from the University of California, Los Angeles, re-analysed the meteorite using scanning electron microscopy, electron backscatter diffraction and electron probe microanalysis. To their surprise, they discovered tiny grains of a compound they had thought could only be made artificially during iron smelting.

The white iron carbide, Fe5C2, has the same crystal structure as palladium boride, Pd5B2. Since edscottite is stable at high pressures, it might even be present in Earth’s iron-carbide-rich core.

The mineral was named by the research pair after Edward Scott, a pioneering cosmochemist from the University of Hawai’i at Mānoa. Only naturally occurring solids are considered minerals and receive a name approved by the International Mineralogical Association.