US researchers have developed a new one-step procedure for introducing tritium radiolabels into pharmaceuticals in unique molecular positions by using an iron catalyst. The method not only provides a new diagnostic tool for ADMA (absorption, distribution, metabolism, excretion) studies, which are essential to assay the efficacy and safety of drug like compounds, but also minimises radioactive waste. 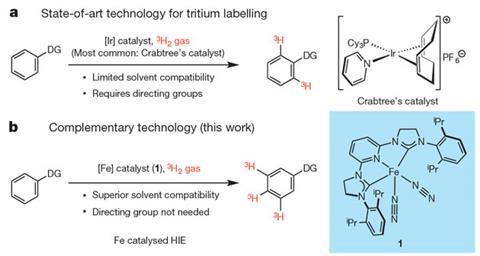 Radiolabelling organic compounds with the radioactive hydrogen isotope tritium is widely used for drug studies and usually requires iridium or rhodium catalysts that rely on directing groups. However, the new iron-based catalytic system has orthogonal chemistry to these existing systems, by selecting sterically accessible C–H bonds, which means that molecular sites that were previously inaccessible can now be labelled with tritium.

The iron catalyst also has other advantages over existing radiolabelling catalysts. It operates efficiently in solvents used to dissolve drug-like molecules; it functions at low pressures of tritium, which reduces the amount of radioactive waste produced; and it’s an Earth abundant element making it more sustainable than iridium or platinum.

‘Our group has a long standing interest in developing catalysts with Earth abundant elements,’ says Paul Chirik, at Princeton University, New Jersey, US, whose lab conducted the study along with researchers at Merck & Co. ‘In addition to their potential cost savings, chemistry with these elements rather than exotic precious metals is also important for sustainability. This work shows that in addition to cost and environmental benefits, the iron catalyst promotes new chemistry,’ he explains.

The team conducted initial studies on the iron catalyst by introducing deuterium, a non-radioactive hydrogen isotope, into small molecules designed to mimic drug-like molecules. After seeing the catalyst worked well, the team moved to the radioisotope laboratory at Merck for experiments with radioactive tritium and approved drug molecules.

‘We were surprised that the iron catalyst was tolerant of so many of the functional groups found in drug-like molecules.’ says Chirik. ‘Catalysis with earth abundant elements like iron and cobalt is a rapidly growing area but one of the major challenges is having the catalyst survive and operate in complex molecular environments.’

‘To my knowledge this is the first time that coordination complexes of iron have been catalysts for such effective labelling,’ comments Bill Lockley, who investigates catalysts for isotope labelling at the University of Surrey, UK. ‘The wide scope of activity shown for the catalyst is also remarkable, auguring well for its use as a general labelling approach.’

The catalyst could become commercially available ‘almost immediately’, says Chirik. ‘The unique reactivity of the iron catalyst makes it quite appealing to the radiolabelling community. Samples we have given Merck have been used on developmental compounds and we have an agreement with Green Centre Canada to produce the catalyst to sell commercially to others interested in using it.’