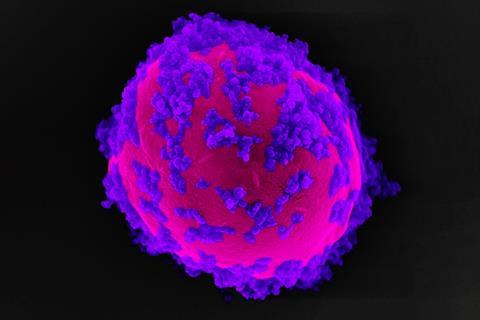 Scientists have augmented a genetically modified version of brewer’s yeast with semiconductor crystals so that its biochemical processes concentrate on making shikimic acid, a precursor for the antiviral drug Tamiflu.

Neel Joshi’s team at Harvard University in the US engineered a strain of yeast that overexpresses the genes involved in shikimic acid synthesis, and attached indium phosphide nanoparticles to the cell surfaces. The nanoparticles act like tiny solar panels – when illuminated, they generate electrons that can be used by the yeast in the pathway for producing shikimic acid.

‘Yeast-based biohybrids are able to convert light energy into other forms of biochemical energy, which could enhance their productivity as cellular factories for biomanufacturing,’ explains Joshi.

Junling Guo and Miguel Suástegui, postdoctoral researchers in Joshi’s group, were inspired by previous hybrid systems where semiconductor ‘solar cells’ feed electrons into bacteria to make substances from carbon dioxide. Suástegui knew how to engineer brewer’s yeast to produce various substances from plant-derived glucose. Guo previously produced nanoparticles and assembled them into larger structures. Together, they made the solar cell concept ‘relevant for yeast systems and for a wider range of semiconductor particles’, Joshi explains.

Yeast normally consumes some glucose to biochemically reduce nicotinamide adenine dinucleotide phosphate (NADP+). Engineered yeast uses the NADPH that forms to reduce 3-dehydroshikimic acid and make shikimic acid. But the Harvard team wanted to channel all the possible glucose into shikimic acid synthesis, and Suástegui therefore engineered out a key NADPH formation enzyme. Guo could then attach InP nanoparticles to the modified yeast with polyphenol networks. When they shine light on the nanoparticles, they release electrons into the yeast to reduce NADP+ and keep NADPH supplies topped up.

Joshi’s group produced around 50mg of shikimic acid per litre of brewer’s yeast culture over a 72 hour period. That’s modest compared to the 2g of 90% pure shikimic acid chemists extracted from 20g of star anise using a coffee maker in 2014. But there are often shortages of star anise, meaning shikimic acid’s price varies wildly.

‘Biomanufacturing using engineered microbes represents a solution with much more control,’ Joshi explains. ‘This could help increase yields for many chemicals already made by yeast fermentation, and make it economically feasible to make more chemicals this way.’

Kate Brown from the US National Renewable Energy Laboratory (NREL) in Golden says the study continues ‘efforts to combine biohybrid nanomaterial systems with cellular metabolism’. ‘The ability to increase the titre of a specific, engineered pathway is an important step forward in this area, as it demonstrates the utility of this approach for biomanufacturing applications,’ she explains.

Her NREL colleague Paul King adds that this result will be a springboard for further advances in this area. ‘It stands out in significance by the fact that the indium phosphide functionalised yeast cells are viable, and thus able to use captured sunlight as a primary source of electrons for biosynthesis of shikimic acid,’ he says.

The Harvard group is now exploring more cell-particle combinations and investigating how electrons are passed from the semiconductor to the cell, Joshi says.