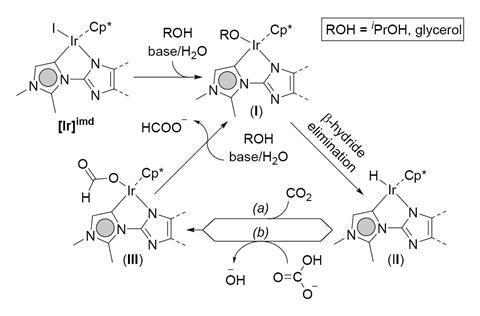 Every year we release around 37 gigatonnes of carbon dioxide into the atmosphere. More than half will never be absorbed by plants or the sea, and only 1% gets recycled into useful chemicals and fuels. Now, researchers in India have come up with a new catalytic process that could be a game-changer in turning carbon dioxide into our main carbon feedstock. They have discovered a new way to transform carbon dioxide into formate that works at atmospheric pressure and doesn’t need hydrogen gas.

This approach, known as ‘transfer hydrogenation’, uses products derived from biomass as a renewable source of hydrogen. However, all the methods available so far required high pressures and high temperatures, making them unattractive for the chemical industry. ‘Now, we found a new iridium catalyst that reduces CO2 at atmospheric pressure and mild temperatures,’ explains Joyanta Choudhury, lead author of this study. ‘And we use glycerol, a waste product in biodiesel production, as a sustainable reducing agent,’ he adds. ‘Nowadays, a substantial amount of the energy used in CO2 hydrogenation goes to pressurising the reagents,’ explains Antonio J Martín, a senior scientist at ETH Zurich who works on CO2 valorisation. ‘Lowering pressure and temperature is a key step towards the distributed recycling of carbon dioxide,’ he says. Scalability will be easier. ‘Beyond cost reduction, it improves safety, and makes industrial operations much simpler.’

Although it is often seen as a waste product, ‘CO2 is an attractive carbon source for producing a range of valuable chemicals and fuels – such as formic acid, methanol, and carbonates’, explains Choudhury. ‘These molecules can be used as an alternative energy source, and also as starting materials for the synthesis of value-added bulk and fine chemical synthesis,’ he adds.

Usually, chemists tackle carbon dioxide reduction through high pressure hydrogenation, which uses dihydrogen gas as a reducing agent. Martín says using hydrogen from fossil fuels is a bad idea. ‘It’s unsafe, and a deadlock – analysing the whole lifecycle of the industrial hydrogenation to methanol shows that the overall reduction process ends up with positive CO2 emissions into the atmosphere,’ he adds.

Although he finds the idea elegant and clever, Martín points out it has some limitations: ‘It is a laboratory proof of concept, the turnover frequency (TOF) is quite low for practical purposes, and it’s a homogeneous catalyst – industry would probably value a heterogeneous alternative more.’ He points out though that if they can ‘expand the scope to other biomass-derived reagents and manage to boost the performance, the impact of this technology could be enormous’.

Choudhury is hopeful. ‘The only two examples with higher TOFs require really harsh conditions, and we are already carrying out a detailed mechanistic investigation to better understand how the reaction works and develop more efficient solutions.’ Researchers are also studying cleaner alternatives based on cobalt and iron, both cheaper and more abundant than iridium.