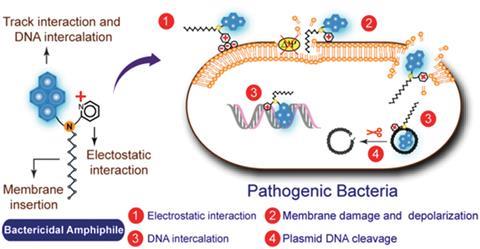 A compound that kills bacteria and cleaves their DNA to prevent them passing on drug-resistant genes has been designed by researchers in India.

The increasing ineffectiveness of antibiotics and the absence of suitable new ones are problems long recognised by the medical community. Bacteria can mutate and adapt to become resistant so the stock of effective antibiotics is diminishing. In a recent report, the UK’s Chief Medical Officer stated that increasingly resistant microbes represent a global threat that in the next 20 years could see many more deaths associated with what were routine and safe surgeries.

The bacterial membrane has been identified as bacteria’s achilles heel, given its profound role in the survival of bacteria. Antimicrobial peptides (AMPs) have been used as membrane acting drugs, but they are characterised as being expensive to produce, easily degradable and hard to deliver. The AMP-mimicking synthetic amphiphile developed by Aiyagari Ramesh and his team at the Indian Institute of Technology Guwahati should avoid these problems.

Their synthetic analogue has a cationic pyridinium head group to initiate electrostatic interactions with both the anionic bacterial cell surface and DNA, a 12-carbon chain hydrophobic tail to promote membrane insertion and a planar fluorogenic pyrene group for intercalation with DNA, that also allows Ramesh’s team to track these interactions spectroscopically. So the compound attacks bacteria in two ways: it kills bacteria by penetrating their membrane and it disables their resistance mechanism by cleaving the DNA that harbours and disseminates drug-resistance traits. In principle it will be possible to design amphiphiles that selectively target and kill bacteria but leave the surrounding tissue unharmed, and ultimately stop them from becoming superbugs.

Julian Hurdle, whose research at the University of Texas at Arlington, US, evaluates new ways to treat drug-resistant pathogens, is very interested in this approach. ‘The membrane has become a bona fide target site for novel antimicrobial agents that control antibiotic-resistant pathogens.’ He does caution however that ‘to advance this research area it is imperative that we obtain knowledge on the types of chemical groups and physicochemical properties needed to impart significant selectivity for bacterial membranes over their mammalian counterparts.’