Nasa’s Curiosity rover has observed high levels of manganese oxides in Martian rocks, which researchers from Los Alamos National Laboratory (LANL) say could indicate that higher levels of atmospheric oxygen, similar to those on Earth, once existed on the red planet. ‘This hint of more oxygen in Mars’ early atmosphere adds to other Curiosity findings – such as evidence of ancient lakes – revealing how Earth-like our neighbouring planet once was,’ LANL said in a statement. 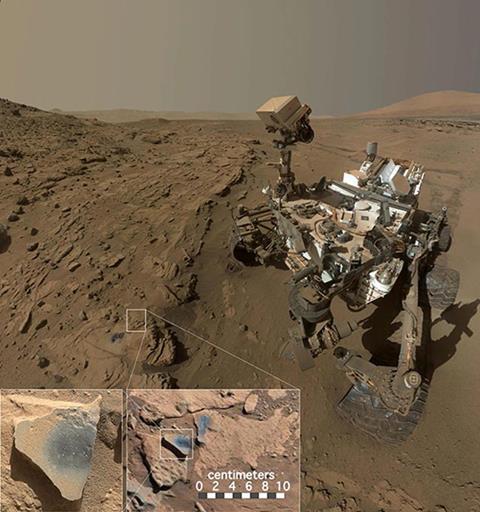 The only ways to make these manganese materials here on Earth involve atmospheric oxygen or microbes, explained Nina Lanza, a planetary scientist at LANL and lead author on the study. ‘Now we’re seeing manganese-oxides on Mars and wondering how the heck these could have formed,’ remarked Lanza, who uses the ChemCam instrument on top of the Curosity rover to analyse the chemical make-up of rocks on Mars. The instrument, which can measure even trace elements, has analysed roughly 1,500 rock and soil samples in the less than four years since Curiosity landed on Mars.

Lanza posits that oxygen could have entered the Martian atmosphere from the breakdown of water when Mars was losing its magnetic field, and without such protection to shield the surface from ionising radiation, that radiation started splitting water molecules into hydrogen and oxygen. She and her team believe that the relatively low gravity on Mars meant that the planet wasn’t able to hold onto the very light hydrogen atoms, but the heavier oxygen atoms remained. Much of this oxygen possibly went into the rocks, leading to the rusty red dust that covers the surface today.