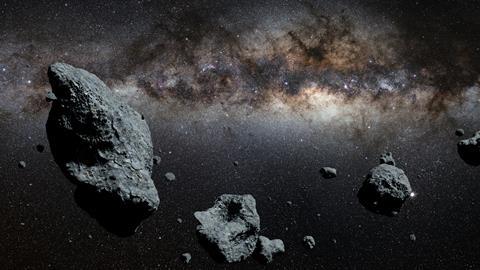 What can we learn from asteroids?

There are two main types of flying space rock – comets and asteroids – and their differences stem from their composition. Comets tend to be ‘dirty snowballs’ of ice and rock, whilst asteroids are composed of a combination of rock and metal.

At the most basic level, asteroids are small, rocky chunks of debris floating through space. Ranging in size from small boulders to giant behemoths hundreds of miles in diameter, they are believed to be the debris of proto-planetary collisions during the violent formation of our solar system. The majority of asteroids we can observe are found in the asteroid belt between Mars and Jupiter, but there is evidence of frequent asteroid impacts on Earth.

What do asteroids have to do with chemistry?

Can we mine asteroids?

Defined as the ‘exploitation of raw materials from asteroids and other minor planets’, asteroid mining has long been considered a potential solution for many of the world’s resource problems. In theory, mining these rocky bodies could provide an abundant source of minerals such as gold, iridium, platinum and tungsten (to name a few) which could either be used in situ for construction or rocket fuel or transported back to Earth.

Based on the growing demand for elements required by industry, it has been suggested that terrestrial reserves of some elements such as platinum, iridium and silver could run out in as little as 20 years. However, if humans could head out into space, this problem could be headed off. Currently, asteroid mining is considered unfeasible due to the astronomical costs of both launch and spaceflight. That being said, as Earth’s resources begin to dwindle it is likely that the lure to mine asteroids will grow stronger.

Companies such as Planetary Resources and Deep Space Technologies are already looking into asteroid mining. In 2016, Planetary Resources announced that they would launch their first asteroid prospecting mission by 2020. However, in order to do so, they will have to overcome three key challenges: correctly identifying asteroids suitable for mining, successfully docking with the asteroid and getting the mined resources back to Earth.

What else can asteroids tell us?

The majority of the elements, with the exception of hydrogen, helium and lithium, are formed by fusion processes at the centre of stars. When huge stars explode as supernovae, elements that are heavier than iron are also made. After the explosion, these elements often coalesce to form interstellar objects such as other stars, planets and asteroids. The intense heat produced by the supernova can trigger all sorts of chemical reactions as these bodies form.

Scientists can investigate these reactions with deep space spectroscopy, which can be used to infer the chemical compositions of interstellar clouds. However, at the moment it is not possible to travel into deep space to make direct observations; the only way direct analysis can occur is when interstellar material comes to us in the form of meteorites.

Are asteroids and meteorites the same thing?

Regardless of whether it was originally a comet or an asteroid, an interstellar object becomes a meteor when it hits the Earth’s atmosphere and starts burning up leaving a trail in the sky. If it then collides with the surface of the Earth, it is defined as a meteorite. It is thought that over 100 tonnes of space debris collides with the Earth’s atmosphere every day, but the majority burns up on entry – creating what are colloquially known as shooting stars.

By analysing space debris, it is possible to create a window into the chemical reactions occurring in places that we cannot observe. For example, meteorites containing diamonds and olivine crystals have been analysed to try and detect the traces of superheavy elements – elements with half-lives so short they would have already decayed on Earth, but could still leave a trace when they were created in space.

Meteorites could also give us clues about the origins of life.

What do meteorites have to do with the origins of life?

In 1969 the Murchison meteorite, a carbonaceous chondrite, fell to Earth and became the subject of much scientific interest. Initial analysis revealed the presence of organic compounds including common amino acids such as glycine, alanine and glutamic acid, and a complex mixture of alkanes. This was similar to the compounds generated in the Miller–Urey experiment, which showed that the chemical origins of life could occur in conditions similar to Earth’s early atmosphere.

The amino acids within the Murchison meteorite were found to be racemic. This mixture of both left- and right-handed chiralities served as a strong indicator that their formation must have occurred in an abiotic manner, as amino acids of terrestrial origin are all L-configured. Purine and pyrimidine nucleobases were also found, and isotopic analysis strongly indicated a non-terrestrial origin, effectively ruling out contamination from Earth.

Observation of the Murchison meteorite has proven that complex organic reactions can occur spontaneously in space, forming compounds that are fundamental for life. In that vein, the study of asteroids provides valuable insight into potential pathways to the origin of life.

Does this mean life could have started on other planets?

Some scientists argue that the ‘origin of life’ can be traced back to a meteorite hitting the Earth billions of years ago, depositing the first complex organic molecules (an idea known as panspermia). But it is very unlikely that entire lifeforms are transported across the galaxy in these small rocky bodies.

That said, the pre-biotic building blocks of life could have originated in space. Whether or not life originated in outer space or here on Earth, there is no question that the first complex organic chemistry occurred in space and we have asteroids to thank for providing the evidence.