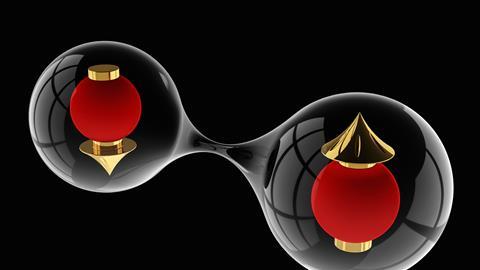 Asymmetric synthesis, but with chiral electrons

A chiral polymer has been made from entirely achiral monomers, simply by using a magnetic field to align the spin of the electrons involved in bond formation.

Creating large organic molecules as single mirror images is important in many fields of chemistry. ‘When you want to make drugs, for example, they have to be recognised by the body, [whose molecules have] one chirality – otherwise it can have catastrophic side effects’ says Ron Naaman at the Weizmann Institute of Science in Israel. Mechanisms that produce only one isomer are therefore highly valuable – for example, asymmetric organocatalysis was rewarded with the 2021 chemistry Nobel prize. However, Naaman says, even here ‘you have make the catalyst and separate it into the two chiralities before you can use it’.

Naaman and colleagues have been exploring the relationship between molecules’ chirality and electron spin polarisation. Spin is one of electrons’ quantum properties, an intrinsic form of angular momentum that doesn’t have a classical physics counterpart. It gives electrons a magnetic moment that can be aligned – polarised – along a magnetic field.

‘We found before that if you have a mixture of the two chiralities and we use incident electrons with a given polarity, we can make it such that one of the enantiomers is destroyed while the other is not,’ explains Naaman. But his team had never demonstrated significant control over a large molecule’s chirality. 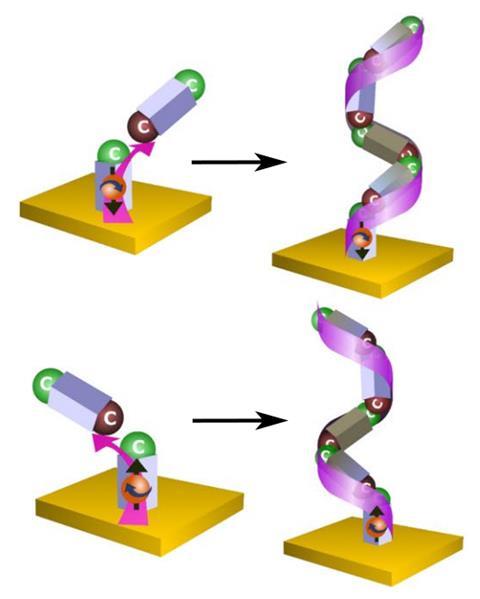 When a spin-polarised electron (orange) passes from the electrode surface (yellow) through the adsorbed molecule into the interaction region with an approaching monomer, it will penetrate easier into a structure that fits its symmetry – and promote formation of one enantiomer in the new stereocentre (green)

Now, they produced chiral poly(2-vinyl pyridine) from completely achiral 2-vinyl pyridine by electropolymerisation on a magnetic electrode. During the reaction, every monomer addition to the polymer’s growing aliphatic backbone creates a new stereocentre. If the polymer chains become long enough and are enriched in left- or right-handed centres, they can adopt chiral helical structures.

Altering the current flow direction allowed the researchers to control the magnetic field at the electrode surface. This polarises the spin of the electrons that are injected into the growing polymer to form new bonds. Control over every new stereocentre’s handedness is strongest near the electrode surface. As the polymer chains grow longer, this control grows weaker, but it was still detectable at a distance of 100nm.

‘I think it’s a pretty cool paper, and it could be significant,’ says physical chemist Matt Beard of the US National Renewable Energy Laboratory. There have been other demonstrations of spin-polarised electrons catalysing asymmetric reactions, ‘but this is the cleanest and clearest demonstration that it can work’, he says. The method could allow synthetic chemists to produce chiral polymers without needing chiral catalysts or other chiral reagent that must be removed and discarded. Beyond this, it could also help solve the mystery of how chiral molecules in living systems came to be almost exclusively single enantiomers.

‘Chiral’ electrons may also have applications in spintronics – an advanced, efficient form of information technology in which information is carried in electron spin rather than in charge currents. The technology requires a source of spin-polarised electrons, which at present requires magnets. However, Naaman explains that ‘if you have a very thin layer of chiral polymer on any electrode, then electrons going through this film are already spin-polarised’.