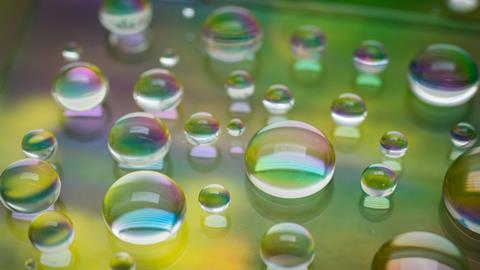 Adaptive Surface Technologies (AST) is a young start-up company pioneering a next-generation, anti-adhesive wonder-coating. When applied, slippery liquid-infused porous surfaces (Slips) create a surface layer that is capable of repelling water and oil, blood and bacteria, and even die-hard hangers-on like barnacles.

Established in 2014, the business’ most recent move following a period of research and development has been toward commercialisation, beginning with applications for industrial systems and consumer packaging to help manufacturers and industry prevent viscous residual fluids sticking to the inside of equipment and containers. Since then, they have continued to expand into different markets. ‘There have been a lot of requests,’ says Grant Tremelling, technical director at the company. ‘The most creative in my opinion was when somebody down in Arizona wanted an anti-gecko coating for his house. The idea being that you would paint a stripe around the base of his house and that any geckos that wanted to crawl over it could not.’ 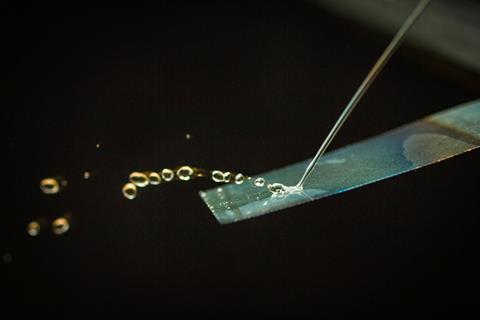 The fully liquid surface is ultra-smooth and super-slippery

The idea might sound a little out there, but back in 2014, researchers at the Wyss lab at Harvard (where the technology originated) actually tested a variant of Slips using a gecko – and the sticky critter was unable to hold on. Nor is it too far removed from how the technology came about in the first place. Prior to founding the company, Joanna Aizenberg, a professor in the Wyss lab, first described the concept of Slips in a study reported in Nature in 2011.1 In that study, Aizenberg’s team developed a surface that mimicked the slippery surface of the Nepenthes pitcher plant. ‘With the pitcher plant, you have these carnivorous traps where ants are free to walk around when dry,’ explains Tremelling. ‘These traps are covered in a variety of nanoscale features and chemical secretions that hold water when it rains; that water makes the surface slippery and ants falls into the carnivorous digesting pot.’

From there, the company was spun-out by fellow Wyss lab member and co-founder Phil Kim, along with Aizenberg – supported by an initial financing round led by BASF Venture Capital that raised $3 million (£2.31 million). Kim has since moved on, and from 2017 the company has been headed up by David Ward. Over the years, the science has diversified and increased in sophistication, but the fundamental principles remain the same. ‘There are two primary components,’ explains Tremelling. ‘The first is a chemical matching between a lubricant and a surface, so that thermodynamically they’re matched very well, and they have an affinity for each other. The second is to create micro or nano roughness to hold that liquid. Once you’ve accomplished both of those, you end up with a surface where your liquid is immobilised in and on that roughness. It presents a liquid interface instead of a solid interface, which then has very slippery properties based on its smoothness and its ability to flow.’ 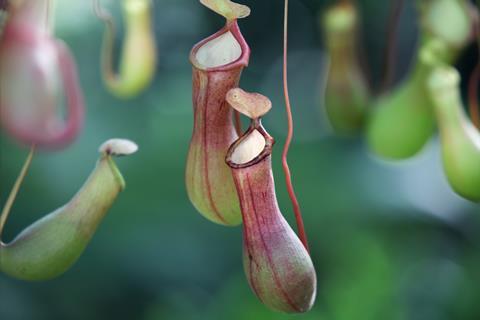 In the end, the team decided against solving the gecko crisis. Their decision was a matter of market size: ‘How many people have a gecko problem?’ asks Tremelling. Deciding which opportunities are worth pursuing is a big part of the job, explains business development manager Greg Pollock, adding that they’re wary of diluting themselves too much at an early stage. ‘Of all the applications we had at that time, we thought there were other ones that we should pursue instead – like boat paint,’ adds Tremelling.

Bottom paint – meaning a coating designed to thwart organisms growing on the hulls of boats – is the company’s most recent commercial venture, released to market in 2019. It was supported by US Department of Energy’s Advanced Research Projects Agency with an eye towards reducing drag on cargo ships, which are responsible for approximately 1% of the world’s energy consumption, thereby increasing fuel efficiency and reducing carbon emissions. While most anti-fouling agents on the market today use environmentally harmful copper or biocides (or both), SLIPS Foul Protect N1x is non-toxic – and more effective than other non-toxic coatings currently on the market. Beyond the lubricious Slips effect, it simply creates a surface that organisms can’t attach to. ‘In general, most organisms have preferences for the surfaces that they will settle on. Some like more hydrophobic areas, some like more hydrophilic areas … what we’ve done is combine multiple chemistries. Basically, we’re confusing the biology,’ explains Tremelling. 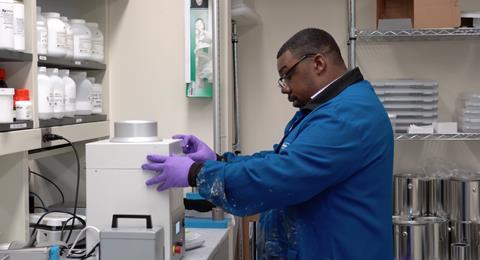 Other research carried out in the Wyss lab has shown that modifying Slips by attaching a monolayer of perfluorocarbon (similar to Teflon), followed by a liquid layer of perfluorocarbon, allows medical surfaces like catheters and stents to be coated effectively, preventing build-up of bacterial biofilms and reducing the risk of infection. With the applications of Slips limited seemingly only by the imagination, it’s likely that other interesting collaborations and products are still to come. Who knows – perhaps in future, there will be a can of anti-gecko paint in every Arizona garage. 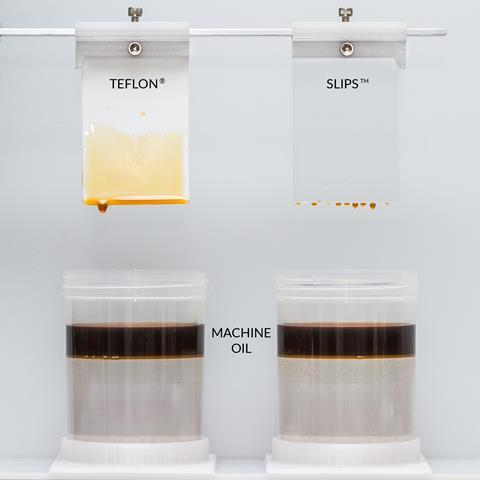 A demonstration of the Slips coating with machine oil, allowing for faster cleaning and reduced waste in industrial production systems