Following the development of a new and more practical method to make the formyloxyl radical in situ, scientists are now exploring the intriguing reactivity of this previously elusive species. The improved access to this radical may lead to tidier and more sustainable routes to industrially valuable products by virtue of formyloxyl being surprisingly weaker than other electrophilic radicals, affording opportunities for selective activation of C–H bonds. 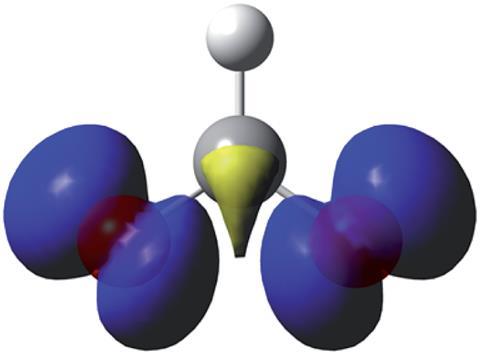 Spin density on the formyloxy radical

The formyloxyl radical, HC(O)O･, has long been implicated in a variety of different reactions, first being proposed as an intermediate in the reaction between formic acid and the hydroxyl radical in the presence of ionising radiation in the 1950s. More recently, it has been suggested to be present during the reduction of carbon dioxide to formic acid and in the oxidation of formic acid – an important energy-aligned process occurring in direct formic acid fuel cells. Formyloxyl is also an object of curiosity due to the theoretical challenges in modelling the radical. Moreover, examining the experimental reactivity of the formyloxyl radical was limited by prior methods necessitated the use of hazardous mercury within a dropping electrode setup.

‘The electronic structure of HC(O)O･ has been the subject of sustained theoretical and spectroscopic studies for many years now but the lifetime of the radical is short,’ explains Sally Bloodworth, an organic chemist at the University of Southampton, UK, who was not involved in the research. ‘Dissociation to give H･ and CO2 is very fast, so the absence of a practical method for in situ generation of HC(O)O･ in the presence of organic substrates has limited study of its possible role as a reactive species in organic reactions before now.’

This hurdle of accessible synthetic routes for generating the formyloxyl radical in situ has since been overcome by Ronny Neumann and his team at the Weizmann Institute of Science, Israel. His team devised a method that transforms formic acid under electrocatalytic conditions with a platinum anode and a crucial polyoxometalate anion to stabilise the radical.1

The polyoxometalate species, [CoiiiW12O40]5-, was initially investigated by the group due to its intriguing properties that could allow for oxidation of C–H bonds. ‘We have a long-standing interest in hydrocarbon oxidation, specifically this catalyst was of interest because it has a very high oxidation potential,’ says Neumann. While this high oxidation potential allows for the activation of usually inert bonds, it is not normally widely applicable as a catalytic species. ‘One of the problems if you have an oxidation potential that’s high enough for doing reactions is that it is very hard to access those oxidation states with a convenient oxidant such as O2.’

This necessitated electrochemical conditions to restore the active state of  [CoiiiW12O40]5- to explore its reactivity. When the polyoxometalate species was introduced into an electrochemical reaction setup of a platinum anode and formic acid, the team found that benzene was readily converted to phenyl formate, a transformation that implicated the elusive formyloxyl radical.

Proposed reaction pathway for reaction of arenes with the formyloxy radical

Further study by the team confirmed the involvement of the formyloxyl radical, its fleeting existence prolonged sufficiently to react with C–H bonds due to stabilisation by the polyoxometalate species. By slowing the dissociation of the formyloxyl radical to H･and CO2 with [CoiiiW12O40]5-, they uncovered a way to generate the radical. ‘A new, reliable method for the electrochemical generation of HC(O)O･ is really good news,’ comments Bloodworth.

Neumann and colleagues have now extended their investigations of the formyloxyl radical towards other hydrocarbon systems such as functionalised arenes and linear terminal alkenes with the goal of understanding how the properties of the radical may allow for the usually inert C–H bond to be activated selectively. During this research, the team has uncovered unexpected, surprising and potentially useful chemistry regarding how the formyloxyl radical behaves with respect to C–H bonds.2

Key to this is the relative weakness of the formyloxyl radical, which imbues it with the ability to selectively activate certain C–H bonds. For example, the radical can abstract hydrogen from toluene and ethyl benzene, but not from cyclohexane. ‘Neumann and co-worker’s success in discovering a way of cleanly generating formyloxyl will have implications in multiple fields,’ notes John Walton, whose research at the University of St Andrews, UK, involves radical chemistry. ‘There were surprises in the chemistry they uncovered for this oxygen-centred species such as its comparative reluctance to decarboxylate and its propensity to add to aromatic rings.’

This ability to oxidise aromatic rings creates the opportunity for selective electrochemical C–H oxidation. Tantalisingly, this could lead to a cleaner electrochemical protocol for converting benzene to phenol. Neumann explains that the current industrial process involves a high temperature and high pressure Friedel–Crafts alkylation of benzene with propene to form cumene and then subsequent reactions with molecular oxygen – a messy route that results in two products, phenol and acetone, which is also undesirable in terms of the overall yield. An alternative route that avoids high temperatures and pressures is enabled by the formyloxyl radical reacting with benzene to yield phenyl formate. Subsequent hydrolysis affords phenol.

Reactions with 1-hexene, 1-heptene and 1-octene as representative substrates yielded mixtures of products

Neumann further explains that the formyloxyl radical could tidy up another essential but problematic process – the production of long-chain aldehydes. Neumann explains that ‘alkyl aldehydes are made by the hydroformylation process and this process relies on the formation of syngas [a mixture of hydrogen and carbon monoxide]. Syngas is made from methane in a very high temperature process that produces CO2 and the hydroformylation reaction is one of the largest homogeneous oxidation processes in the world. It is a big industry. So, if we could make an electrochemical process based on something like we are suggesting, that might be a huge advantage.’

Generating the formyloxyl radical in situ under electrochemical conditions could also potentially provide a new process for synthesising aldehydes. The formyloxyl radical has been shown by the team to preferentially undergo anti-Markovnikov oxidative addition with terminal alkenes under certain conditions, affording direct access to aldehydes as the major product. Since the reaction to generate formyloxyl is electrochemical, the process avoids relying on syngas and the energy-intensive temperatures and pressures needed for hydroformylation.

‘The practical demonstration of the radical as a reagent for anti-Markovnikov alkene oxidation is synthetically useful in itself, but the potential application in continuous processing electrosynthesis is exciting too,’ explains Bloodworth. ‘Electrochemical methods are of enormous interest right now –often proceeding under milder conditions, with improved functional group tolerance, scalability and reduced environmental impact compared to traditional batch reactions.’

However, the synthetic method for making the radical may need further improvement before it can be extended to continuous flow electrochemistry. Though formyloxyl is more reluctant to decarboxylate and dissociate than the acyl radical formed from acetic acid, due to the methyl radical being more stable than the hydrogen radical, the overall Faradaic efficiency of the C–H activation and oxidative addition reactions remains low. Neumann explains that this is due to not being able to use the in situ generated radical quickly enough and his group plans to explore the possibility of electrochemical engineering approaches to improve this efficiency, potentially also targeting the nature of the employed electrode.

While improving the in situ production of the formyloxyl radical may one day lead to competitive and tidier industrial processes, the progress in mapping the chemistry of this elusive entity already allows for improved understanding of radical reactions. Bloodworth keenly emphasises the significance of this advance, noting that ‘to me, the most interesting aspect of the work is that the researchers have been able to study the kinetics of aromatic substitution reactions in which the formyloxyl radical is an electrophilic oxidant. This provides the first basis for predicting the reactivity of more complex carboxyl radicals – as yet unexplored.’