There’s been a surge of data emerging from Covid-19 vaccine trials. The studies are mostly Phase 1 safety trials, but can give some hints of immune response to the vaccines. At the same time, trials in which animals are immunised and then deliberately exposed to the virus give positive indications of potential protection. However, we still don’t know what level of immune response will be protective for humans, nor how long that protection will last. 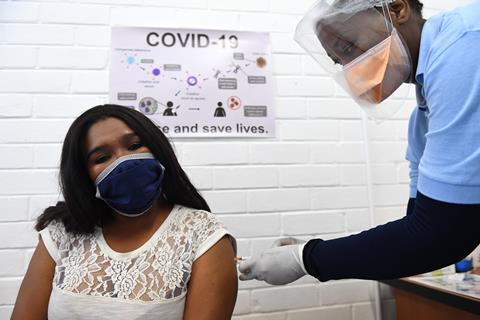 As initial data shows the vaccines are safe and elicit positive immune responses, companies are racing to start larger trials in areas where the virus is most prevalent to determine its efficacy

The acknowledged leader is the candidate from the University of Oxford, UK, which is a chimp adenovirus vector (ChAdOx1) expressing the entire spike protein of Sars-CoV-2. A randomised controlled trial of over 1000 healthy adults showed an encouraging antibody and T cell response.1 The vaccine is to be manufactured by AstraZeneca.

‘Both arms of the immune system were very well stimulated, including a very good T cell response,’ says Adrian Hill, director of Oxford’s Jenner Institute. The immune response, especially in terms of neutralising antibodies, was significantly increased by a second dose. That will be influential in planning future trials and any eventual rollout, Hill confirms.

The levels of antibodies or T cells needed for protection are as yet undetermined, points out Dennis Burton, an immunologist at the Scripps Research Institute in La Jolla, US. ‘That is the acid test for any vaccine,’ he says. It’s likely that T cells in particular will be important for long-term protection.

China’s CanSino Biologics reported results on the same day as Oxford from a study that administered two different doses of its adenovirus-type 5 (Ad5) vectored vaccine in a trial of 600 volunteers in Wuhan.2 Ad5 is relatively common in humans, and 52% of the trial participants already showed antibodies against it, but levels of Ad5 immunity will vary in different populations. People with high existing antibody levels to Ad5 produced around half as many antibodies to Sars-CoV-2. The T cell response was similar in those with and without pre-existing antibodies to Ad5.

The only other adenoviral vaccine on the market in Europe is for Ebola, approved on 1 July 2020. Scientists in Europe and the US have given Ad5 a wide berth, since an experimental HIV vaccine, developed by Merck & Co, appeared to increase rates of HIV infection. ‘The Chinese and Russians clearly did not believe [the data]. For the 2014 Ebola outbreak, they made Ad5 vaccines and both got licensed in their respective countries,’ says Hill.

Also in July, Moderna finally reported full data from the Phase 1 trial of its mRNA vaccine.3 Researchers have expressed annoyance at the company’s tendency to press release headline results, rather than publish full datasets. Moderna has ‘dribbled out small amounts of data over time, which is frustrating and unhelpful,’ says Gregory Poland, director of vaccines research at the Mayo Clinic in Minnesota, US.

Its trial of 45 healthy adults tested two vaccinations of mRNA encoding the spike protein, 28 days apart. Binding antibodies to the spike protein increased rapidly after the first vaccination, and again with the second dose. Moderna is to begin a Phase 3 trial with the US National Institutes of Health, involving approximately 30,000 volunteers.

More than half of Moderna’s volunteers experienced minor side effects such as fever, chills, fatigue, headache and pain at the injection site. This is relatively common with vaccination. For the Oxford group, there were enough fevers and systemic side effects that the trial protocol was modified to include paracetamol before vaccination.

Earlier in July, Pfizer and BioNTech reported on their mRNA vaccine candidate, which encodes the receptor binding domain of the spike protein, encapsulated in a lipid nanoparticle. The preprint described a robust T cell and a strong antibody response4 in 60 participants in Germany who received either one or two doses. Since then, the companies have announced that a different vaccine candidate, which encodes the entire spike protein, is to start a Phase 2/3 study.

‘The caution here is that these vaccine platforms have never been licensed before in humans,’ notes Poland. In a larger trial with 20,000 people receiving active vaccine, a serious side effect that occurs in one in ten thousand people might be missed, he warns. Regulators will have to decide what compromises and level of risk is acceptable.

Sinopharm and Sinovac’s inactivated virus candidate is also advancing to Phase 3 trials. It will be given to over 8000 healthcare workers in China, as well as trials in the United Arab Emirates and Brazil. ‘This is super old technology, and it is often hard to grow the virus, which is why rabies vaccine is so expensive,’ says Hill. For some, this brings advantages. ‘We know how to deal with the inactivated approaches,’ says Florian Krammer, immunologist at the Icahn School of Medicine in New York City, US. ‘We don’t have a single RNA vaccine on the market.’

This strategy tends to require two or three vaccine doses, and often an adjuvant such as alum to bolster the response. ‘[The World Health Organization is] not so keen on those vaccines,’ says Hill. This is mainly because when vaccines for Sars were tested in animals, there was some evidence of antibody-dependent enhancement – in which exposure after vaccination can lead to more severe disease. ‘I don’t think this is a major concern at this point,’ says Burton of the Covid-19 candidates.

Up to the challenge?

Early vaccine trial reports prompted a rash of optimistic headlines. ‘The big question is how strong an immune response you need to induce protection,’ says Oxford’s Hill. ‘Most people [are focusing on] neutralising antibodies, because they don’t induce high levels of T cells, but we do.’ Nonetheless, the responses from different aspects of the immune system necessary for protection remain unclear.

‘The major concern remains efficacy, and the durability of efficacy, which is why these Phase 3 trials will be so critical,’ says Poland. ‘The fact a vaccine induces an immune response is not proof that it will prevent infection. Many companies have got to this point and failed in Phase 3 trials.’ In the case of Ebola, inducing small amounts of antibodies with vaccine was enough to provide protection. Whereas even the highest antibody levels to malaria do not offer a strong defence on their own.

I was quietly pleased. The vaccines did what they said on the tin. So far, so good

To try and get a handle on how these immune responses might translate into protection, researchers are conducting challenge studies. These involve animals – in this case mostly primates – being either infected or vaccinated and then deliberately exposed to the virus. One such trial, led by Dan Barouch at Harvard University, US, in May showed that macaques challenged with Sars-CoV-2 five weeks after an initial infection displayed strong resistance to the virus.5 A second paper revealed that macaques given a series of DNA vaccine candidates also appeared to have good protection when challenged with the virus.6 ‘We are trying to race into vaccines [for Covid-19], but we haven’t got a clue what the correlates of protection are,’ says Danny Altmann, an immunologist at Imperial College London, UK. Animal studies can provide some insights into where that bar lies.

Challenge trials in macaques conducted by Janssen,7 Oxford,8 Moderna,9 Sinopharm–Sinovac10 and Inovio11 have all produced some level of protection, although the precise details vary. ‘There are half a dozen groups trying to zoom into Phase 3 trials where the stakes and costs are high,’ notes Altmann. He says the animal data support all the vaccines as plausible candidates. ‘I was quietly pleased. The vaccines did what they said on the tin. So far, so good,’ says Altmann. ‘The Oxford one stands out in the rip-roaring levels of T cell immunity that they showed,’ he adds.

With the coronaviruses that cause the common cold, immunity starts to wane around 80 days after infection. Burton, however, argues this is irrelevant. ‘They are two separate things,’ he says. ‘A vaccine can do a lot better than a natural infection.’ Burton describes the early results from the mRNA vaccines as promising. We can make guesses as to how long the response will last, he says, ‘but you have to put the vaccine into people to understand what happens in a larger population’. The spectrum of possible outcomes include preventing transmission entirely, preventing infection or just preventing an infection from developing into the disease. ‘If we had a vaccine that could prevent the disease in large numbers of people, that would be very welcome,’ says Burton.

Results from the Oxford­–AstraZeneca Phase 3 trials in the US, Brazil and South Africa could be available by September–October if all goes well. With five other candidates also already in Phase 3 trials, Burton believes that efficacy data for several vaccines will become available before the end of 2020, but warns against predictions. ‘In this whole pandemic, a lot of things have been done faster than one would have imagined even six months ago,’ he says. ‘But this is a new pathogen and nature may have lots of surprises along the way.’