Genetically engineered neurons that create their own coating made of an electrically conductive polymer could be used to selectively interface brain regions with prostheses or reduce neuronal misfiring in conditions such as epilepsy.

‘People have been interested in interfacing electronics with the brain for a long time. [A treatment] for Parkinson’s disease, for example, is deep brain stimulation,’ says Zhenan Bao from Stanford University in the US, who is one of the lead researchers behind the study. In deep brain stimulation, an electrode is implanted into the brain to send electrical impulses into specific brain regions. But this also activates off-target tissues and can sometimes result in seizures.

A team led by Bao and Karl Deisseroth, also from Stanford, has now found a way to electrically stimulate only certain types of neurons. The technique uses a virus that genetically targets selected neurons, meaning it can modify excitatory cells even if they sit in close proximity to inhibitory ones. 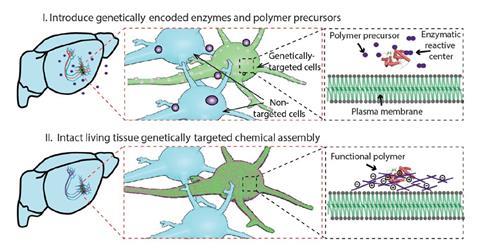 The neurons express an enzyme in their cell membranes that catalyses the polymersiation of phenylenediamine, synthesising polyaniline across the surface of the cell

The viral carrier inserts a gene into the targeted neuron cells, instructing them to express the enzyme ascorbate peroxidase on their surface. When the cells are then soaked in a mix of aniline, phenylenediamine and small amounts of hydrogen peroxide, the enzyme initiates a polymerisation reaction that coats each cell in polyaniline – an electrically conducting material.

Bao’s team tested its method in mouse brain slices and even in live Caenorhabditis elegans worms. The worms with polymer-coated excitatory neurons move more and become ‘bendier’, while those whose inhibitory neurons are targeted become more sluggish.

The conductive coating alters the neurons’ firing frequency, but how exactly this works is still uncertain. ‘There are different effects depending on the polymer being used,’ says Bao. ‘In some cases, the firing frequency becomes higher, in other cases it is lowered.’

‘What’s really novel about this approach is the use of genetically engineered cells to create an oxidative environment that’s sufficient to do the reaction without any need for putting in electricity,’ says bioelectronics researcher David Martin from the University of Delaware, US. Martin’s team uses electrochemical reactions to coat tissues with conductive polymers, but that involves high voltages, he explains. ‘So what was really needed was a way to do that inside the tissue directly.’

While Bao’s method requires soaking the entire organism in the reagent mixture, she says that the chemicals ‘appear to be biocompatible’. ‘But of course, in humans, their long term toxicity still needs to be investigated,’ she adds.

‘Our next step is to see what other mechanisms could be used to trigger the polymerisation,’ Bao says. She also hopes to study the technique in other living organisms such as mice.

‘Even if putting conjugated polymers into tissue kills a few cells, that’s not necessarily a bad thing in terms of looking at applications,’ comments Martin. ‘For example, you could imagine using such techniques to go after cancers.’