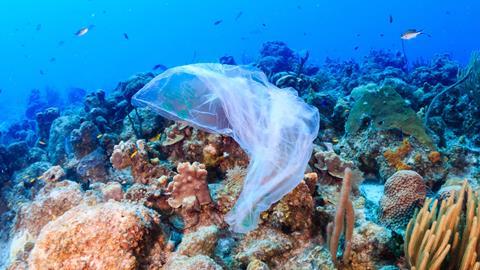 The European Commission has said that by 2030, all plastic packaging on the EU market will be recyclable or reuseable, under the vision set out in its new non-binding Plastics Strategy. The plan sets out a number measures to tackle the problem of plastic waste, including restrictions on the intentional use of microplastics and a decrease in the production of single-use plastics.

‘If we don’t change the way we produce and use plastics, there will be more plastics than fish in our oceans by 2050,’ says the Commission’s first Vice-President Frans Timmermans, who is responsible for sustainable development. ‘The only long-term solution is to reduce plastic waste by recycling and reusing more.’

Around 25.8 million tonnes of plastic waste are generated in Europe every year, the Commission says. Less than 30% is collected for recycling. Of this, a ‘significant share’ is sent to be treated outside the EU. About 30% goes to landfill and 40% is incinerated. While landfilling has decreased over the past decade, incineration has grown.

The aim is that by 2030 more than half of plastic waste generated in Europe will be recycled. The Commission predicts that sorting and recycling capacity will be four times higher than 2015 levels; and demand for recycled plastics in Europe will grow by the same amount (currently, around 6% of all demand.)

To this end, it will issue revisions to the Packaging and Packaging Waste Directive, and new guidelines on a standardised system for collection and sorting of waste, in 2019. Later this year, it will propose rules to limit single-use plastics, and for labelling biodegradable plastics to help consumers understand how to dispose of them. It says some materials claiming biodegradability properties, such as ‘oxo-degradable plastics’, can fragment into microplastics. It will investigate restricting their use.

If we don’t change the way we produce and use plastics, there will be more plastics than fish in our oceans by 2050

The Commission has asked the European Chemicals Agency to review the scientific basis for taking regulatory action on ‘intentional’ microplastics, which are added to products such as cosmetics and detergents. However, it notes most microplastics littering the oceans are generated from wear-and-tear on plastic-based products so it will consider measures such as labelling for tyres and minimum requirements on the release of microfibres from textiles.

To tackle marine litter, the Commission proposes a new directive on port reception facilities to ensure that waste generated on ships or gathered at sea is returned to land and managed. This proposal will go to the European Parliament and Council of Ministers for adoption.

An additional €100 million has been earmarked for developing ‘smarter’ and more recyclable plastics materials; making recycling processes more efficient; and tracing and removing contaminants from recycled plastics. The Commission notes that the lack of information about contaminants creates a significant obstacle to achieving higher recycling rates.

PlasticsEurope, which represents European plastics manufacturers, broadly welcomes the Strategy. However, Karl-H. Foerster, PlasticsEurope Executive Director, stresses that any measures taken on single-use plastics should be proportional, effective and harmonised at EU level. And points out that the only way to stop landfilling is a legally binding restriction. On the same day, PlasticsEurope published its own voluntary commitments: 60% of plastic packaging to be reuseable or recyclable by 2030 and all plastic packaging to be reused, recycled or recovered by 2040.

The European plastics recycling industry association (PRE) also supports the Commission. If implemented swiftly and efficiently, the strategy can create a sustainable plastics market, says PRE’s president Ton Emans. But, he adds, ‘The plastics industry will have to adapt to the changes ahead. Quality recycling can only be achieved if products are designed for recycling, collected, sorted efficiently and treated through advanced recycling processes.’

Tatiana Lujan of ClientEarth, a group of activist lawyers, calls the strategy ‘ambitious’, but says phasing out and banning the worst plastic types and single-use plastics should start now, not in over ten years’ time. ‘The focus needs to be more on prevention, as well as reducing the amount of plastic that goes to waste.’

Delphine Lévi Alvarès, coordinator of Rethink Plastic, a network of NGOs, stresses that that voluntary agreements and pledges by industry should in no way replace political action, and says: ‘It is essential to bring forward ambitious legislation to drastically reduce the consumption of both single-use plastic items and packaging within this Commission’s term.’

The Strategy was published just as the European recycling industry faces the backlash from China’s announcement in July to ban import of certain types of plastic waste from 2018. While the Commission insists it creates opportunities for EU recyclers, PRE’s Emans reports that the restrictions have created turmoil on the markets. In 2017, more than 85% of Europe’s exported plastic waste was shipped to China. China’s ban covers imports of 24 kinds of solid waste, including the low-grade polyethylene terephthalate used in plastic bottles. It also imposes a maximum 0.5% contamination level in imported materials.

The market is now oversupplied with low quality plastics waste that used to be sent to China, says Emans. ‘The surplus is unable to be totally absorbed in the EU as it doesn’t meet the quality requirements of the European recyclers. This abrupt change in market conditions demonstrates the urgency needed to implement a real and sustainable waste market in Europe. This can only be done by driving the quality upwards by changes in design for recycling, collection and sorting.’

Meanwhile, the UK government is also seeking to address plastics waste as part of its 25 Year Environment Plan that aims to eliminate ‘avoidable’ plastic waste by the end of 2042. It will extend the 5p carrier bag charge to all retailers in England; work with supermarkets to introduce plastic-free aisles; look at how taxes or charges could reduce waste; seek evidence on how to reduce the use of single-use plastics; and inject new funding into plastics innovation through the government’s £7 billion R&D fund.

Initial reactions to the plan were mixed, with some critics suggesting the plan lacks detail and urgency. Greenpeace UK’s executive director John Sauven says, the UK needs a 25-month emergency plan more than it needs a 25-year vision.

However, British Plastics Federation Director-General Philip Law welcomed the commitment to provide a higher level of funding for innovation, and says the call for evidence is an opportunity to reform the regulatory regime for packaging recovery and recycling ‘to nurture a full-blooded domestic recycling culture that is not dependent upon the export of waste for recycling overseas’.