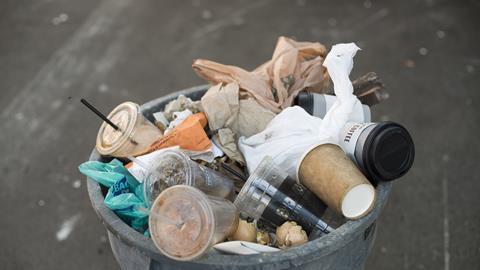 Although fewer than one in 400 disposable coffee cups are recycled in the UK, the government has decided not to introduce cup charges or recycling targets. Responding to an environmental audit committee report, which recommended urgent action to tackle the country’s ever-growing mountain of single-use cups, the government promised to instead focus on anti-littering messages and voluntary producer initiatives.

The UK recently committed to eliminate ‘avoidable’ plastic waste by 2042, and all non-recyclable waste by 2050, by extending disposable packaging charges and increasing funding for plastics research. In early January, the environmental audit committee published a report looking at ways to reduce waste from the 7 million disposable coffee cups used every day. The cups’ mix of materials means less than 0.25% are recycled.

The report called for clear labelling of non-recyclable cups and a 25p charge per single-use cup. This, it claimed, would work better than the discounts some shops currently offer for customers bringing their own mugs. The government, however, would like to extend the discounting system. Littering should be deterred through well-designed labels, although they admit that anti-littering messages are so ubiquitous that they have become ineffective.

Moreover, the committee recommended monetary incentives for producers to invest in greener packaging. Unless all coffee cups are recycled by 2023, the report added, they should be banned altogether – a target the government dismisses as unrealistic. The recycling system needs to be looked at as a whole, the government says, and voluntary measures like the paper cup manifesto are already committed to solving the problem.

The environmental committee chair Mary Creagh criticised the government’s response, saying it ‘shows that despite warm words they plan no real action’.