Europe wants to get tough on plastic waste 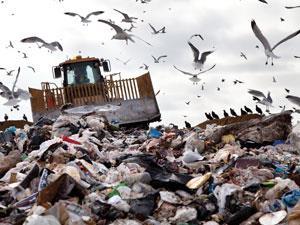 The European parliament has signalled that it is prepared to support an ambitious effort by the European commission to sharply reduce the level of ‘dangerous plastics’ in the environment, as well as lightweight plastic shopping bags that could be subject to a blanket ban. In a non-binding resolution on plastic waste parliament backed key points in a commission green paper issued in March 2013 that outlined a new European strategy on plastic waste in the environment.

Vittorio Prodi, the Socialist and Democrat member of the European parliament who drafted the resolution, says that current plastic waste regulations to protect the environment are too weak. Parliament, he said, wants ‘to change bad habits and account for our products, from production through to final disposal’.

Only 25% of plastic waste in Europe is currently recycled, the European parliament noted in the resolution, with the rest being landfilled, incinerated or discarded. The European parliament’s resolution ‘calls on the European commission to draft specific proposals by the end of the year to phase out the landfilling of recyclable and recoverable waste by 2020 and discourage the incineration of this waste’.

Parliament also wants to see ‘the most dangerous plastics’ withdrawn from the market and believes ‘single-use plastic bags should be phased out wherever possible’. Dangerous plastics were defined as those ‘most disruptive to human health and the environment, such as micro- and oxo-biodegradable plastics,’ as well as plastics containing heavy metals and other substances that can make recycling more difficult. The resolution also calls for ‘bolder steps to tackle illegal exports and dumping of plastic waste’.

‘Let’s be clear,’ says Joe Hennon, spokesman for European environment commissioner Janez Potocnik. ‘Plastic as such is not dangerous.’ However, he notes that plastics contain ‘a very high number of chemical additives’, such as such as phthalates, BPA and HBCD, which, if not recycled or disposed of properly, can be potentially dangerous for human health and the environment.

As for oxo-plastics, Hennon says the danger comes from material designed to break into ever smaller pieces in the environment. He notes that the effect of microplastics on human health and the environment are yet to be fully explored. Hennon adds, however, that the European commission’s current focus is on lightweight plastic bags. Hazardous plastics will be covered as a topic in the European commission’s all-encompassing waste review package expected in May.

It comes as no surprise that Plastics Recyclers Europe, representing the recycling industry, issued a statement enthusiastically supporting the resolution. However, some industry groups and companies, while voicing support for protecting the environment from hazardous plastics, are arguing that new European regulations are not needed.

In November, the commission announced a proposal to reduce the use of lightweight plastic shopping bags, either through bans or by requiring shoppers to buy plastic bags for a small fee at the checkout, a measure some EU nations are already pursuing.

Plastic shopping bags that end up as litter on land or in the sea can last hundreds of years in the environment posing a threat to marine eco-systems, fish and birds. In 2010, an estimated 98.6 billion plastic carrier bags were placed on the EU market, or about 198 bags per person. Consumption within the EU varies widely, however, with annual use in Denmark and Finland estimated to be just four lightweight plastic shopping bags per person per year, compared with 466 bags in Poland, Portugal and Slovakia.

Chemical giant BASF believes that further plastic waste regulations are unnecessary. Nicole Seidl, responsible for BASF’s energy and resource efficiency and sustainability indicators, says that ‘it is important to follow the Roadmap for a Resource Efficient Europe,’ a commission initiative to make Europe’s economy sustainable by 2050. ‘The EU commission should concentrate on education, public incentives and the proper implementation of the existing waste legislation in Europe to ensure that plastic and other waste is disposed of in a responsible manner,’ she says. ‘BASF supports market-based instruments, for example charges for the responsible use and re-use of plastic bags.’

Italy and France have exempted bio-based and compostable bags from national legislation ‘under certain conditions’, he says, while the UK is currently considering an exemption. He adds that exempting bioplastic bags in new EU regulations ‘would be a step forward’.

However, Hennon says that no exemption is planned for bioplastics. ‘Bioplastics, as [with] other plastics, contributes a priori to plastic marine pollution and any new measures on plastic and plastic waste management need to focus on resource conservation and action preserving the marine and terrestrial environment.’