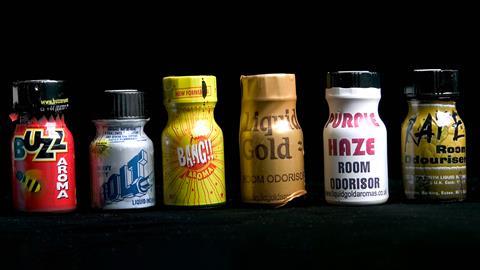 What are poppers and are they legal?

Inhaling alkyl nitrites feels like becoming instantly drunk according to some users, although the effect lasts for only a few minutes. Also known as poppers, these chemicals have been taken recreationally since the 1960s. Although they are sold openly, usually in small brown bottles with enticing brand names such as ‘liquid gold’, their consumption remains a legal grey area. While they have gone in and out of fashion over the years, they continue to be an important part of gay subculture.

What are poppers, chemically speaking?

Today, the most common formulations contain isopropyl nitrite. But the story starts with amyl nitrite (usually a mix of pentyl nitrite isomers): first used as an angina therapy in the nineteenth century, it was freely available in UK pharmacies until the 1970s. The liquid drug was sold in sealed glass ampoules that were crushed to release the therapeutic vapour, creating the eponymous ‘pop’.

Amyl nitrite was first synthesised in 1844 by French chemist Antoine Jérôme Balard, who also discovered bromine. He passed nitrogen through amyl alcohol (pentanol) and produced a liquid whose vapour made him ‘blush’. Alkyl nitrites can also be synthesised by reacting the corresponding alcohol with either nitrous acid, or concentrated sulfuric acid and sodium nitrite.

How do alkyl nitrites work? 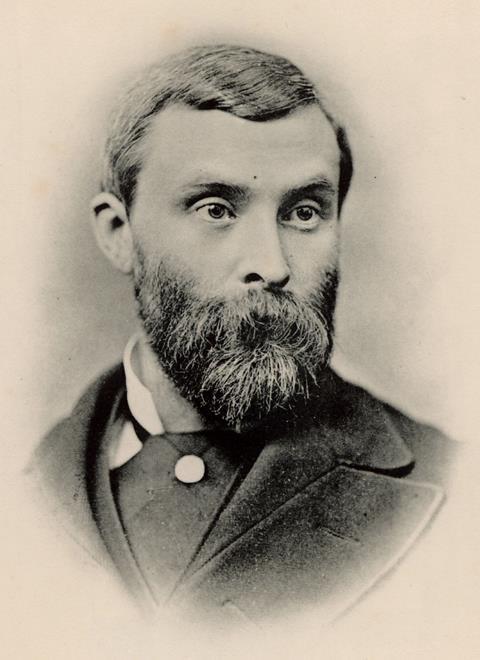 In 1867, Scottish physician Thomas Lauder Brunton started using amyl nitrite vapour to treat angina in an attempt to replace the practice of therapeutic bleeding to reduce angina sufferers’ blood pressure. After witnessing experiments with amyl nitrite by University of Edinburgh biochemist Arthur Gamgee, Brunton decided to test the substance on his patients and found it revealed their chest pain. When inhaled, alkyl nitrites release nitric oxide, which binds to the haem group in the enzyme guanylate cyclase. This then causes smooth muscle to relax and blood vessels to dilate.

Since the 1930s, amyl nitrite has also been used to combat cyanide poisoning. Its antidotal properties are attributed to its oxidation of ferrohaemoglobin (Fe2+) to ferrihaemoglobin (Fe3+), which then binds cyanide, stopping it from binding to cytochrome C oxidase and disrupting cellular respiration. In the last decade, amyl nitrite use in cyanide antidote kits has largely been discontinued due to the risk of abuse and lack of evidence for efficacy.

How did alkyl nitrites come to be a recreational drug?

Alkyl nitrites’ euphoric and intoxicating effects were recognised early on. Scottish psychiatrist James Crichton-Browne, who prescribed amyl nitrites for angina and menstrual cramps, described its effect on patients in a 1871 letter to Charles Darwin: ‘… the patients grew stupid and confused and bewildered. They have ceased to give prompt intelligent and coherent answers to questions.’ 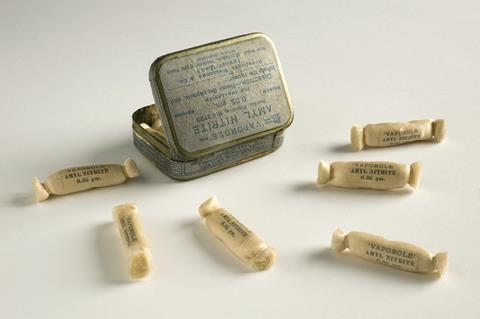 From the 1960s onwards, poppers became established as a recreational drug, with various alkyl nitrites produced, including isopropyl nitrite, isobutyl nitrite and butyl nitrite, to get around legal restrictions. The drug was widely used by clubbers for a brief time in the 1990s, but plays a continued role in gay subculture. ‘You might say that poppers fumes became incorporated into the body of the gay community; their ubiquity influenced even those who didn’t use them,’ writes Adam Zmith in his book Deep Sniff: A History of Poppers and Queer Futures.

As recreational use developed, so did legal restrictions on human consumption. By the late 1970s, they were no longer available over the counter at pharmacies. Manufacturers currently market poppers as ‘cleaning agents’, ‘industrial solvents’ or ‘room odourisers’ and state they are not intended for human consumption. Most governments seem happy to collude with this status quo. ‘They may be the only product that the state allows to be sold on a lie,’ writes Zmith. 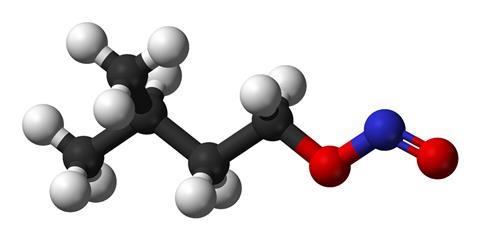 Safety fears have surfaced over the years. Alkyl nitrates will burn the skin and some users experience minor ‘poppers burn’ around the nostrils that will heal quickly. But if swallowed or inhaled in very high doses, poppers can be fatal due to nitric oxide blocking haemaglobins’ ability to carry oxygen to cells (similar to the effects of carbon monoxide).

Isobutyl nitrite has been linked to cancer and was banned by the European Union in 2007, leading poppers manufacturers to quickly switch to isopropyl nitrite. Since then, there have been relatively rare reports of frequent users losing their eyesight. The cause is not yet fully understood.

In June 2021, the US Food and Drug Administration issued a warning not to purchase or use nitrite poppers due to the potential adverse health effects, but it is still legal to sell them in the US. Canada banned their sale in 2013, although there have been calls to relax the prohibition.

While currently legal in the UK, the issue was debated in Parliament in 2016 during the passing of the Psychoactive Substances Act, designed to control so-called legal highs. After pleas from the gay community, including a member of parliament revealing himself to be a poppers user, the government agreed with an assessment by the Advisory Council on the Misuse of Drugs (ACMD) that alkyl nitrites don’t fall within the scope of the psychoactive substance definition. In 2020, the home secretary sought further clarification from the ACMD, and suggested that poppers should be formally legalised. To date, their status remains in limbo.