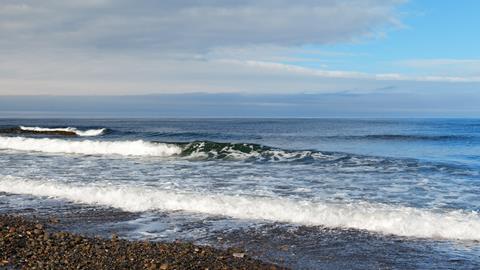 Fears that ancient methane could add to warming may be unfounded

Methane released from Arctic seafloor appears to be metabolised by bacteria

Vast amounts of frozen ancient methane – a greenhouse gas 34 times more potent than carbon dioxide – is stored under the Arctic seas, and could potentially be released by global warming. As a result some climatologists are deeply concerned that this may amplify climate change. New research in the Arctic, however, shows that, even when ancient methane is released at the seafloor, methane reaching the surface has mainly been produced more recently. The results suggest the dangers from melting seafloor deposits may be exaggerated, as processes in the water column effectively prevent much methane reaching the atmosphere.1

Human activities have significantly increased atmospheric levels of methane through farming, landfill and other activities, and the gas is estimated to have caused around 28% of anthropogenic global warming. Whether emissions of geological methane contribute significantly, however, is controversial. To gain insight, researchers at the University of Rochester in New York and elsewhere headed to Prudhoe Bay, Alaska, which contains both permafrost and methane hydrates.

Ancient methane exists on the Arctic sea floor in both permafrost and methane hydrates – an ice-like structure that traps methane from underground deposits. The carbon-14 in this ancient methane has almost entirely decayed, whereas the proportion of carbon-14 in methane from more recent sources such as newer sediments and bacterial processes is far higher. Oceanographer Katy Sparrow and colleagues used a new technique she developed with her PhD supervisor John Kessler to extract dissolved methane from seawater both near the surface and near the seabed at several different locations, before analysing its radiocarbon content.2

They found that, across many of the sites, the methane extracted from the seawater near the seabed was, on average, significantly older than the methane extracted near the surface. This suggests that although ancient methane was being released into the water column, little was making it up to the surface. ‘We did not quantify or attribute any of the removal, but microbes do consume methane in the water column, and also it can just get swept away to a different area – where presumably it can also be consumed by microbes,’ Sparrow explains.

John Severinghaus of the University of California, San Diego, says the ‘very significant’ results are consistent with his own group’s studies on a methane increase in geological history.3 ‘The prediction that there is ancient methane leaking out into the atmosphere causing global warming has basically been falsified, at least for this part of the Arctic.’ He says more studies are needed in other parts of the world. ‘Now that I’ve seen the results of our tests, this test and a few others, I’m very suspicious of claims that methane is leaking out into the atmosphere and causing global warming,’ he concludes.