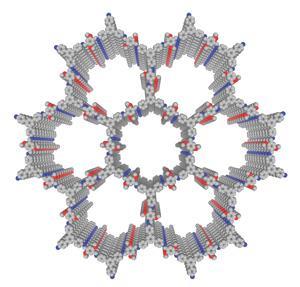 By making formerly fragile covalent organic frameworks (COFs) resistant to harsh conditions, researchers in Japan have created what they think could be a powerful new catalyst concept. Donglin Jiang’s team at the National Institutes of Natural Sciences in Okazaki have already used their chiral COFs to enable selective and high-yielding Michael reactions with low-reactivity ketones. They believe theirs is the first example of a heterogeneous catalyst based on a crystalline porous material used in this reaction.

‘Compared to small molecular catalysts, COFs increase catalytic activity because their nanochannels can accumulate reactants and substrates, while retaining high enantioselectivity,’ Jiang tells Chemistry World. ‘Another advantage is that the catalysts can be easily recycled upon simple filtration or centrifugation. This feature is not available for small molecule catalysts dissolved in the reaction systems.’

The Japanese scientists concentrated on COFs consisting of layers of hexagons joined at their corners, each hexagon formed of 12 molecules linked together through imine bonds. Although previous frameworks had been formed by stacking hexagons, electron distribution in the framework was highly polarised, causing repulsion that made the structures relatively unstable.

Jiang’s team added methoxy groups to the molecules forming the hexagons’ edges, donating electrons to reduce the problematic polarisation. They then tested the resulting COF’s stability by exposing it to various challenging environments for a week. In each case they ended up with at least 70% of what they started with, even in strong acid and base and boiling water.

Modification of the COF with (S)-pyrrolidine gave it catalytic activity

To make the COFs into catalysts, the chemists substituted some of the edge molecules with replacements that they could attach (S)-pyrrolidine groups to through ‘click’ chemistry. These COFs could drive Michael reactions to completion in water under atmospheric conditions in 12 hours, when (S)-pyrrolidine on its own took 22 hours. They also achieved complete conversion and high enantioselectivity and diastereoselectivity in reactions between cyclohexanone and a variety of substituted ß-nitrostyrenes. ‘This method is widely applicable to many other catalytic systems,’ stresses Jiang. COF-based systems have already been recently developed for aldol and Diels–Alder reactions, he says.

These findings are ‘very important’ says Richard Blom, research director at the independent research foundation SINTEF in Oslo, Norway, who has developed catalytic metal–organic frameworks (MOFs). ‘Heterogenisation of homogeneous catalysts while keeping the activity/selectivity of the homogeneous version is not straightforward,’ he says. ‘They manage to keep high activity, regenerate the catalyst and use it for several cycles.’