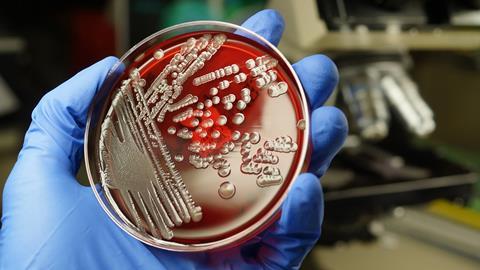 A bacterium has been created with a totally synthetic genome that can also produce proteins using fewer triplet DNA bases – or codons – to encode the standard amino acids required for life.1 The discovery could serve as a platform for developing new proteins with unique properties.

The genetic code lays out the rules on how DNA is translated into a message that specifies the amino acids in a protein. Codons containing three of the four nucleobases cytosine, guanine, adenine or thymine can encode either the start of protein synthesis, incorporating an amino acid into the protein being synthesised or terminating protein synthesis. Natural organisms make use of all 64 possible codons but there are only 20 standard amino acids, so some nucleobase triplets can encode the same amino acid. The new engineered Escherichia coli bacterium needs fewer transfer-RNAs (tRNAs), which carry amino acids to the site of protein production, and only 61 codons to encode protein synthesis.

Reducing the number of codons required to build amino acids could be useful in biosynthesis, so efforts are being made to streamline protein production. Jason Chin and his colleagues at the UK’s Medical Research Council Laboratory of Molecular Biology have taken an impressive step in this direction, creating a variant of E. coli with a 61-codon genome that contains four million bases and over 18,000 changes. ‘Chin and colleagues have replaced the entire around 4000 gene chromosome of E. coli with a chemically synthesised genome,’ says Clyde Hutchison of the J. Craig Venter Institute, US, who was one of the scientists who made the first synthetic cell back in 2010.2 ‘They recoded the genome to use only 61 of the 64 codons, thereby freeing up three codons that could potentially be used to encode novel amino acids into proteins. This scale of genome replacement is larger than any complete genome replacement reported so far.’

To achieve this, the researchers systematically replaced all the known instances of two codons encoding for serine and one stop codon with their synonymous codons in the bacterium’s DNA. ‘Our bacterium is very similar to the natural one in the sense that they produce the same proteins,’ says Julius Fredens, who participated in the study. ‘What changes in the synthetic bacterium is that its DNA instructions are simpler while conveying the same meaning, and as a result the cellular machinery that interprets these instructions can be modified too.’ Fredens explains that when particular codons are replaced, the tRNAs in charge of reading those codons and incorporating the corresponding amino acids become redundant and can be deleted as well.

The scientists first generated the DNA sequence computationally and then purchased the synthetic sequence in small pieces, each of them around 1/400th of the whole genome. They then used yeast to stitch the DNA pieces together and introduced the larger constructs into a natural E. coli bacterium, replacing part of the bacterium’s natural DNA with the corresponding synthetic version. They repeated the procedure several times, replacing adjacent segments of the genome at each step. ‘The endpoint of this was an E. coli bacterium that contained a fully synthetic genome corresponding to our computational design, with some minor fixes that we identified and repaired along the way,’ Fredens says. ‘This is a powerful demonstration that the technologies required for building life from scratch – some of which were developed in our lab – work well, and that the possibility of making designer organisms has become a reality.’