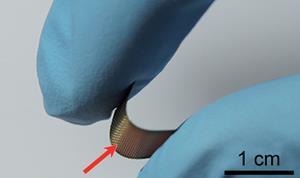 Wearable electronics are quickly becoming the fashion. And there could soon be a way to power those electronics indefinitely, now that scientists in China have developed a solar cell ‘textile’ that could be woven into clothes. The textile retains a power-generation efficiency close to 1% even after been bent more than 200 times, and can be illuminated from both sides.

Scientists have been looking into flexible solar cells for decades, partly for coating irregularly shaped objects but also for integrating into wearable fabrics. One popular line of investigation has been dye-sensitized solar cells, in which a pigment absorbs sunlight to generate electrons and their positive counterparts, holes, before passing on those charges to inexpensive semiconductors. These solar cells are cheap and flexible, but the liquid nature of their pigments means that they must be well sealed. Bend a dye-sensitized solar cell more than a few times and the seals are likely to break, destroying its light-harvesting properties.

That is why Huisheng Peng at Fudan University in Shanghai and colleagues have been exploring another option: polymer solar cells. Although their maximum efficiencies fall below 10% – about half that of crystalline silicon, the most prevalent solar cell – polymer solar cells are lightweight, flexible and easy to manufacture. Peng and colleagues’ solar cell textile consists of microscopic interwoven metal wires coated with an active polymer (to absorb the sunlight), titanium dioxide nanotubes (to conduct the electrons) and another active polymer (to conduct the holes). The researches coated each side of the textile with transparent, conductive sheets of carbon nanotubes, which complete the circuit.

Because of the textile’s symmetry, the cell can be illuminated on either side. In tests it exhibited a maximum efficiency of 1.08%, which varied by less than 0.03% after 200 cycles of bending. However, the textile is currently only about the size of a fingernail. ‘The main difficulties encountered are how to scale up the solar-cell textile while maintaining high energy-conversion efficiencies,’ says Peng.

Materials scientist Anyuan Cao, who was not involved with the work, believes the results are interesting, particularly the use of carbon nanotube sheets to allow illumination from both sides. But he warns that wearable solar cells are still some way off. ‘Current textiles demonstrated in laboratories are too small and have low energy conversion efficiencies,’ says Cao, who is based at Peking University in China. ‘The materials involved and the fabrication processes are still expensive. Practical use not only requires that the textiles should withstand simple bending, but also that they should sustain much more complex deformations such as folding and twisting, even under dynamic conditions.’

Peng says he and his colleagues are now working to increase the energy-conversion efficiency of their solar cell textile.