The oligodeoxyfluorosides before (left) and after (middle) exposure to zinc ions, and the difference between the two (right)

Researchers at Stanford University in the US have devised a cheap DNA-based system able to detect and identify an unprecedented number of metals in water.1Eric Kool’s team used sets of short sensor chains attached to polyethylene glycol–polystyrene beads to discriminate between 57 different metals, including alkali, transition and lanthanide metals.

Having swapped conventional DNA bases for groups whose fluorescence changes in the presence of metals, the chemists’ system can use the colours produced as a fingerprint for each metal. ‘A single experiment requires an extremely tiny amount of material – only about a picomole of any one chemosensor – so the sensing is quite inexpensive,’ Kool tells Chemistry World. 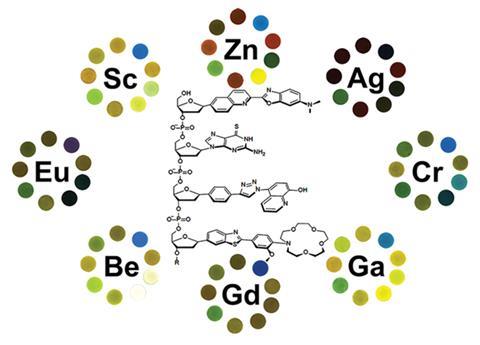 The way in which nine different DNA-like molecules respond to different metals creates a unique, colourful fingerprint for each

The Stanford researchers picked nine of these tetramers with the best combination of wide-ranging metal recognition and colour responses that could be easily distinguished from one another.. They then screened them against 57 different metals, watching what happened with an epifluorescence microscope. ‘We photograph the beads before and after exposure to a metal sample,’ Kool explains. ‘We quantify the changes with imaging software and then use statistical analysis to compare patterns of responses.’

The system could discriminate all 57 varieties of metal, 50 in concentrations below 100µM. Seeking simplification, Kool’s team found six tetramers still performed almost as well, with a blind test on 50 different individual solutions only struggling to differentiate zirconium and indium.

‘This study is a tour de force on the power of complex systems to provide the selectivity required for array-based chemical nose sensors,’ says Vincent Rotello from the University of Massachusetts, Amherst, US. ‘The sheer scope of the study is important, demonstrating just how many different analytes can be differentiated.’ However, as the Stanford team only examined a single metal ion per experiment, ‘actual quantification or identification of mixtures of ions will be challenging’ Rotello warns.

Yet, while they may not have covered the full 50-plus element range, Kool highlights that his group has already used this approach to detect and quantify contamination by eight different toxic metals in complex natural water specimens.2