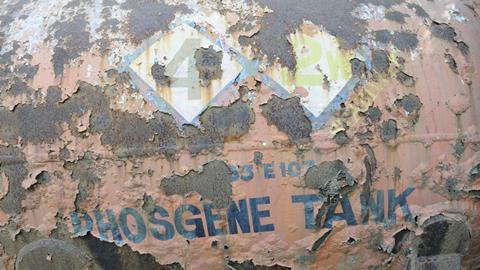 Chinese scientists have improved the sensitivity of test strips for phosgene gas by using a different fluorophore.

Phosgene gas reacts with lung proteins, disrupting the blood–air barrier and suffocating victims. Although deadly, many chemical plants require phosgene to synthesise products such as pharmaceuticals and pesticides. But accidental leaks are a risk. In 2016, for example, a leak at Gujarat Narmada Valley Fertilizers and Chemicals in India killed four workers and affected nine others.

Phosgene also has a history in chemical warfare. In the first world war, phosgene was responsible for around 85% of gas attack deaths. And because phosgene is widely used in industry, it is more easily available than many other chemical weapons. Rapid, sensitive and portable detectors for phosgene are therefore needed to signal industrial leaks and terrorist attacks.

Now, a team of scientists led by Shuizhu Wu at South China University of Technology have solved this problem with aggregation-induced emission (AIE) fluorophores. The AIE effect is the exact opposite of ACQ – rather than fading on aggregation, AIE fluorophores become brighter when they aggregate.

Ben Zhong Tang discovered the AIE effect in 2001 with co-workers at the Hong Kong University of Science and Technology. ‘The AIE effect actually makes it difficult to develop “turn-on” test strips because the fluorogens with AIE characteristics are already emissive in the solid state,’ explains Tang. Commenting on the work of Wu and coworkers, Tang says ‘The researchers have smartly solved this problem by designing an AIE fluorogen whose emission colour rapidly changes upon reacting with a trace amount of phosgene.’

Normally the probe fluoresces blue. But, if phosgene is present, the probe’s o-phenyldiamine moiety reacts with phosgene to form a ring structure, changing the fluorescence from blue to green.

The test strips are made by simply depositing the probe fluorophores onto filter paper and have a detection limit of 1.87ppm, below the level deemed immediately dangerous to life or health. ‘In a facility where there is the possibility of phosgene presence, the operator can place a test strip in the air for 2 minutes, and check whether it changes from blue to green with a hand-held UV light,’ explains Wu. ‘This way he or she can determine whether there is a phosgene leak in there. By storing the test strips in a small container, you can actually carry it with you everywhere.’

This article is free to acces until 2 October 2017