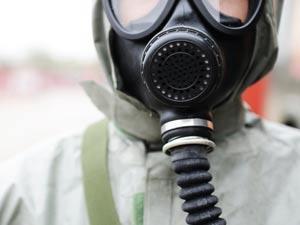 This week, Matt Gunther takes us to the front line.

Gas! Gas! Quick, boys! – An ecstasy of fumbling,
Fitting the clumsy helmets just in time;
But someone was still yelling out and stumbling,
And flound’ring like a man in fire or lime…

The searing words of Wilfred Owen rang out in anguish during the first world war. Through Owen’s haunting stanzas, and those of his contemporaries including Siegfried Sassoon, the British public gained a true insight into the nature of war – not through the distorting lens of pomp and patriotism, but by being exposed to the abject horrors experienced by those on the frontline.

Addressed to his mother, Owen’s poem Dulce et decorum est was sent with a letter in 1917 that laid out one such horror with chilling sincerity. It simply read: ‘Here is a gas poem, done yesterday.’ Sent from the confines of his infirmary bed in Craiglockhart hospital in Scotland, it is unclear which particular gas attack Owen was referring to – there were simply too many – but it is likely he was being haunted by his experience of a chlorine gas attack. 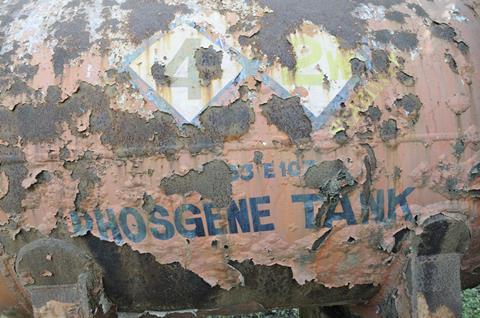 Known to slowly asphyxiate its victims in a cloud of green gas, chlorine is regarded as one of the most notorious chemical agents used during the Great War. But although its effects were forever sealed in the public consciousness through the works of Owen, Sassoon and many others, a more insidious chemical had a far wider impact on the conflict – phosgene.

A century earlier, during the Napoleonic wars, a 22-year old chemist, John Davy, was diligently attempting to defend his elder brother, Sir Humphry Davy, in a heated debate on the discovery of chlorine at the University of Edinburgh. Although the latter went on to declare chlorine as a new element, John, in playing with the harmful gas, produced a new gaseous compound by stimulating a reaction between chlorine and carbon monoxide with sunlight.

Davy noted that chlorine gas lost its signature colour entirely during the reaction and the resulting gas was completely colourless. Its effects on the human body were no less potent than chlorine however, and its odour no less pungent.

‘Its odour was different from that of chlorine, something like that which one might imagine would result from the smell of chlorine combined with that of ammonia, yet more intolerable and suffocating than chlorine itself, and affecting the eyes in a peculiar manner, producing a rapid flow of tears and occasioning painful sensations.’

He named the strange gas phosgene – a combination of the Greek words for light, ‘phos’, and birth, ‘genesis’. Following on from his studies, Davy went on to pursue an illustrious career in the military, but did not take his newfound gas with him. He quickly rose up the ranks of the medical profession in the army to gain the title of Inspector General of Hospitals.

During this period, large industrial companies – such as the German chemical firm BASF – realised phosgene could be used to synthesise industrial dyes and pigments, including urea azo dyes. The compound became a mainstay at chemical companies in the manufacture of dyes, plastics and other consumer products, and is still used extensively to this day. 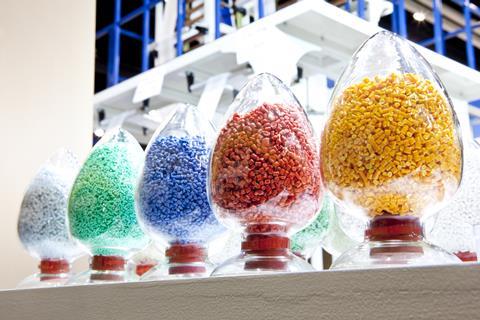 BASF and other German industrial firms, such as Bayer, were manufacturing phosgene in significant quantities prior to the outbreak of the first world war, but its development as a chemical warfare agent was rapidly brought to the fore by the Nobel prize winning chemist, Fritz Haber, in 1915.

In what was to become a dangerous chemical arms race between Haber and the French Nobel laureate Victor Grignard, the German army quickly developed a violent mixture of phosgene and chlorine and deployed it to immobilise Russian troops on the Eastern Front in May 1915 at Bolimów, Poland. This one attack led to the death of several thousand Russian troops.

The inconvenient symptoms Davy experienced a century earlier when exposed to a small dose of phosgene were to be amplified on a terrifying scale throughout the first world war. Grignard quickly realised that the transparency Davy observed in pure phosgene, as opposed to a chlorine-based mixture, could be a crucial advantage for the Allies – simply put, their enemies would never see it coming.

Victims of a phosgene attack could only fumble to put on their masks when the smell of musty hay enveloped them. By then, it was no doubt too late and they would suffer from blurred vision, vomiting and eventually drown from the build-up of fluid in their lungs.

Of the 100,000 soldiers who died from chemical weapons exposure during the first world war, phosgene was responsible for the deaths of 85,000 and revealed the true nature of modern warfare with horrifying and deadly transparency.

Chemistry World’s Matt Gunther with the chemistry of phosgene. Next week, who decides what chemicals go into your shampoo?

Should products be pulled from the shelves at the first publication of a scientific paper that shows a potential link between one of their ingredients and cancer? The role of science in perception of risk, and especially in policy decisions, is far from straightforward, and sometimes plays second fiddle to public perception.

Find out more with Ben Valsler in next week’s Chemistry in its Element. Until then, thank you for listening, I’m Meera Senthlingam.