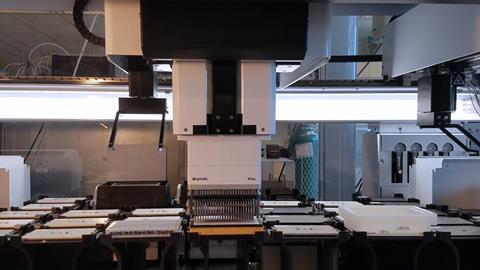 The team used a high-throughput system capable of screening thousands of reaction conditions per hour to test how various base-catalysed chemical reactions, including elimination, solvolysis, imine formation, Katritzky reaction and Knoevenagel condensation, are affected by the addition of glass microspheres

Glass can accelerate various base-catalysed reactions as well as the degradation of base-labile biomolecules, new research shows. The work serves as a reminder for chemists to carefully select what containers they use to store chemicals and perform reactions in.

Last year, Yangjie Li and colleagues in Graham Cooks’ lab at Purdue University, US, reported how glass surfaces can accelerate the Katritzky transamination reaction. Doubting that they’d been lucky enough to ‘spot the only one reaction that can be accelerated by glass, I thought maybe we should try all the important organic reactions,’ explains Li.

The group has now used a high throughput system to screen the rates of various reactions in the presence and absence of glass microspheres. To their surprise, they found that all the base-catalysed reactions, including elimination, solvolysis, condensation and oxidation reactions, were accelerated by glass. They attribute this to strongly basic silanolate groups on the glass surface, which can participate in the reaction directly, or indirectly, by converting protic solvents into their conjugate bases. The acceleration effects were larger at lower concentrations, as a greater proportion of the material was at the glass surface.

They also found that glass accelerates the degradation of phospholipids. Yu Xia, a bioanalytical chemist at Tsinghua University in China, says the lipidomics community should take note because lipids are often stored in glass containers to avoid plastic contamination. ‘This new finding clearly prompts caution on the use of methanol or other protic organic solvents for lipid storage in glass containers, as this effect can lead to both false identification and inaccurate quantification in lipid analysis.’

Cooks hopes the work encourages chemists to think carefully about which containers they store chemicals and perform reactions in, ‘especially if you’re going to be working at very low concentrations, which is increasingly the case, as that’s where these effects come in.’

While they might alarm organic and analytical chemists, the findings also highlight the potential of glass as a green heterogeneous catalyst. ‘You can just simply rinse it and the whole catalytic power is recovered,’ says Li. ‘It’s a good way of avoiding corrosive chemicals.’ Li and colleagues achieved reactions rates that were up to 1000 times faster using glass. As the acceleration is dependent on the glass’s surface area, there is potential to increase these even rates even further.