Scientists in the US have developed a new method for synthesising biodiesel that avoids making any unwanted glycerol byproduct. 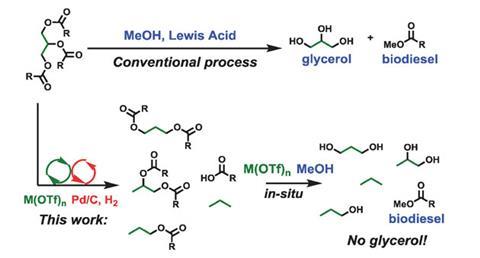 Crude glycerol, usually contaminated with a mixture of fatty-acids, water, soaps and salts, is a major waste product from the biodiesel manufacturing process. Biodiesel production has contributed to a global oversupply of glycerol, with around 2.5 million tons generated in 2014. Aiming to tackle this problem is a team of researchers, headed by Tobin Marks of Northwestern University, Illinois, that has devised a pathway for generating biodiesel that bypasses glycerol altogether.

The process uses a tandem catalytic system, consisting of metal triflate and supported palladium catalysts, to selectively break down triglyceride esters into carboxylic acids, which can be converted to biodiesel, as well as propane and valuable C3-oxygenates. ’We are coupling two different reactions, using two different catalysts in the same pot. One catalyst opens or breaks the carbon–oxygen bond and the other catalyst hydrogenates the product, which is unsaturated. That helps drive the reaction thermodynamically,’ explains Marks.

While recent years have seen a considerable body of research into ways of converting waste glycerol into more valuable chemicals, this new approach avoids making it entirely. As Tracy Lohr who worked on the project explains, ‘The advantage of our system is that we don’t form any glycerol, instead we’re forming more useful products. Going from the triglycerides to those more useful precursors eliminates steps, it’s more cost-effective and you get your product easier and faster.’

Catalysis expert Alan Goldman, from Rutgers University in the US, applauds the new technique: ‘The application of these catalysts to the degradation of triglycerides represents an elegant approach toward the conversion of plant oils to high quality diesel fuel; this route is potentially very valuable as it yields C3 co-products more desirable than the glycerol obtained from traditional trans-esterification processes.’ Goldman also notes that while the technology is still in a development phase, it brings hugely encouraging implications for the future of biodiesel production. ‘While the system is not ready for commercialisation, it is certainly exciting to see progress toward such an important goal achieved through such fundamentally novel and well-characterised chemistry.’