Humans have been consuming carbon nanomaterials for millennia 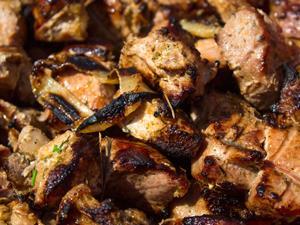 Man has been eating graphene oxide in barbecued meat for millennia

Researchers in India have verified that barbecuing meat produces graphene oxide and other carbon nanoparticles, and concluded that, as man has been happily eating these nanomaterials since the discovery of fire, they are non-toxic to humans.

Nanoscience is a relatively young field and, since the effects of nanomaterials are not completely understood, there is growing concern over them working their way into the environment and consumer products, including drugs. It can take 20 to 30 years for a new drug to reach the market, such is the rigour of modern testing procedures, and yet on the evidence presented we already ingest more graphene oxide than previously thought.

‘Carbon nanomaterials have been consumed alongside the progress of human civilisation, so have effectively passed the test of time,’ says team member Sabyasachi Sarkar, who performed the study alongside Manav Saxena at the Indian Institute of Engineering Science and Technology in West Bengal.

Proteins in meat undergo pyrolysis when heated in air, producing graphene oxide sheets and carbon nanoparticles, via the condensation of five- and six-membered rings. The presence of nitrogen in the atmosphere results in these nanomaterial being doped with nitrogen. Graphene oxide is also formed when plant matter is charred and plant ash can be found in several medicines, such as gripe water, which treats stomach ailments in children, and active coal powders that are used for bowel clearance.

Sarkar and Saxena confirmed the presence of graphene oxide in charred meat and gripe water. They also studied the effect of digestion on graphene oxide by exposing roasted meat to enzymes secreted by salivary glands, and to acidic conditions mimicking the human stomach.

Graphene oxide and nanoparticles produced by burning meat and plants were found to be softer, with more defects, compared to those synthesised in the lab. The result is that they are soluble in water, and more suited to biological uses. This is not to say that all nanocarbons are non-toxic. ‘Their existence within ecosystems should be monitored, and detailed medical analysis is required,’ says Munusamy Thirumavalavan, an inorganic chemist and meat analysis expert at the National Central University in Taiwan.

Sarkar hopes to extend the work to determine the effects of nanocarbon products once they have passed through the blood–brain barrier.