Infection protection drops over time, but the firm will go ahead with regulatory submission 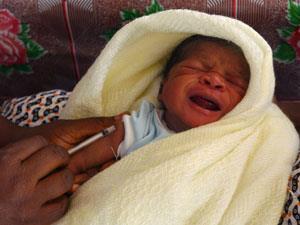 The vaccine is less effective in infants than children a few months older, but still offers some protection

Preliminary results from the first ever Phase III clinical trial of a malaria vaccine show that it can reduce malaria infections in vaccinated children over 18 months. GlaxoSmithKline (GSK), which is developing the vaccine, says that the data is sufficiently convincing for the company to begin the process of filing for regulatory approval.

The trial of the RTS,S vaccine candidate involves over 15,000 children at 11 sites in seven African countries, followed for 18 months after vaccination so far. In babies first vaccinated at 6–12 weeks old, RTS,S reduced the number of malaria cases by 27%. For children aged 5–17 months, the treated group experienced 46% fewer cases of malaria than the control group.

The company acknowledges that the protection the vaccine offers declines relatively rapidly – the 12-month follow-up results showed a 56% reduction in malaria episodes for children aged 5–17 months at first vaccination. A booster dose, given 18 months after the first three injections, might help maintain protection over a longer period. This option is being tested in the trial programme, but those results will not be available until the trial finishes next year.

The vaccine is far from ideal, but it still has the potential to prevent large numbers of infections until a more effective vaccine can be developed. ‘In Africa we experience nearly 600,000 deaths annually from malaria, mainly children under five years of age,’ said Halidou Tinto, principal investigator from the Nanoro, Burkina Faso trial site and chair of the trial programme committee, in a statement. ‘Preventing substantial numbers of malaria cases would mean fewer hospital beds filled with sick children. Families would lose less time and money caring for these children and have more time for work or other activities. And of course the children themselves would reap the benefits of better health.’

The World Health Organization (WHO) estimates that there are over 20 malaria vaccine projects in clinical trials. But most of these are still in the early stages, and the most advanced are still 5–10 years behind RTS,S.

GSK will submit its application to the European Medicines Agency (EMA) next year, under a special process for medicines developed by European companies for use outside the EU. The EMA will give its evaluation of the vaccine, which the WHO will use in its assessment of whether to recommend the vaccine for use. The WHO has indicated that this decision could be made as early as 2015, depending on the trial outcomes. African national regulatory bodies would then make their own decisions about licensing the vaccine.