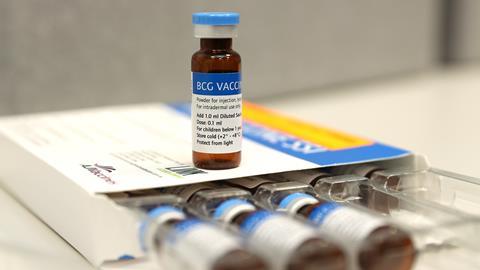 There are indications that BCG revaccination might protect against Covid-19. The latest results come from a Greek study published as an as yet un-peer reviewed preprint on medRxiv.

BCG – Bacillus Calmette–Guérin – celebrates its 100th anniversary this summer and remains the only approved vaccine against tuberculosis. Developed by French bacteriologists Albert Calmette and Camille Guérin from a bovine relative of Mycobacterium tuberculosis, it was first given to an infant in a Parisian hospital in July 1921.

It was recognised early on that BCG vaccination appeared to reduce death from diseases beyond just tuberculosis. Immunologists have long suspected that this live vaccine primes the immune system to better fight infection. Last year, it was hypothesised that BCG vaccination may protect against Covid-19.

The Greek preprint – yet to be peer reviewed – reported that BCG revaccination resulted in a 68% risk reduction for Covid-19 infection, clinically or virologically confirmed. Five patients receiving a placebo developed severe disease but just one in the BCG vaccine group. However, the trial was relatively small with only around 300 volunteers. ‘It is interesting data, but a small study with high loss to follow-up,’ says Frederik Schaltz-Buchholzer, an epidemiologist at the University of Southern Denmark, who is involved in the Danish BCG trials. ‘We shouldn’t be opening champagne bottles just yet. We have a lot of trials still going on.’

Data from large trials of BCG revaccination in healthcare workers are now in the works. However, in January, a Dutch study of 6132 patients drew attention to initial findings that the vaccine did not offer protection against Covid-19 symptoms in elderly people.

Immunologist Mihai Netea, who was involved in the Greek and Dutch study, says an important difference between them may be that older Greeks received the BCG vaccine as children, whereas people in countries such as Italy, the Netherlands and Belgium never received one. ‘It might be that the T cell response is different in those who have previously been exposed to BCG, and that the innate immune response is also boosted further by a second administration,’ says Netea, who led studies showing how BCG re-programs immune cells.

Most of the BCG trials worldwide for Covid-19 are in healthcare workers, with more than 2500 volunteers in Brazil. These are part of the Brace trial, which has recruited over 7500 healthcare workers at 34 sites in Brazil, the Netherlands, Spain, the UK and Australia. This study is led by Nigel Curtis, a vaccine scientist at the Murdoch Children’s Research Institute and University of Melbourne, Australia, with support from the Bill & Melinda Gates Foundation. The main question posed is whether the off-target effects of BCG boosts innate immunity and thereby lessens the severity of Covid-19, says Curtis.

A trial of over 1200 healthcare workers is also underway in Denmark, and a trial with older volunteers that is still recruiting there. The former trial was stopped early, because healthcare workers began receiving Covid-19 vaccines. This is an issue with other BCG trials carried out in Europe and the US, where trial participants became eligible for Sars-CoV-2 vaccines. Epidemiologists at the University Medical Centre Utrecht, the Netherlands, have now invited BCG trials to take part in a meta-analysis. The aim is to increase the statistical power by combining the data from all ongoing trials now, rather than waiting until the trials are finished, explains immunologist Henri van Werkhoven at Utrecht.

BCG is not the only existing live vaccine under evaluation. The Washington University School of Medicine in St Louis is coordinating an international trial to investigate if the measles, mumps and rubella (MMR) vaccine protects healthcare workers from Sars-CoV-2. Also, a recent observational study from India suggests that an immune therapy with killed mycobacterium reduced hospitalisations from Covid-19.

‘BCG revaccination in countries with high pressure load may be useful in countries where classical vaccines are not available. Of course, larger studies from developing countries would be needed to definitively prove that,’ comments Netea. Production of BCG would also need to be ramped up.

These results will be important for future pandemics ‘in order to get even a partial protection from the beginning, so you don’t have to close economies and have so much suffering’, Netea says. He adds that thankfully ‘we have other vaccines that are much more effective [for Covid-19], so the efforts should be put in there’.