Covid-19 pandemic motivated friends to combine their expertise in cell biology and mathematical modelling, and realise company they had being discussing for years

Max Jamilly and Ed Steele share a fundamental belief that the global meat industry is broken. ‘We know that it’s killing us, it’s killing the planet. Global food security is at an all-time low, and demand for meat alternatives is absolutely soaring,’ says Jamilly. But despite the market success of product lines such as Beyond Meat and the Impossible Burger, many consumers find meat alternatives disappointing compared to the real thing. The reason is one crucial, missing ingredient: fat.

Last year, synthetic biologist, Jamilly and mathematician, Steele co-founded Hoxton Farms, a start-up dedicated to growing cell-based, sustainable animal fat. The co-founders take a harmless biopsy from an animal and establish a culture or cell line based on stem cells. With different nutrients, or culture conditions, stem cells are able to mature into any cell type, including fat cells. A sample of a cell line is introduced into a bioreactor, a vat of culture medium where the cells proliferate exponentially into fat cells. At the end of the process, they can be harvested as purified animal fat. 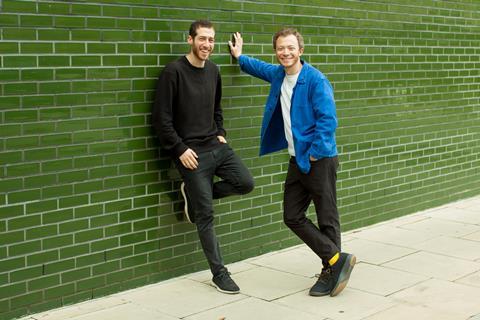 While fat sounds like an essential component of meat alternatives, it is a crucially underdeveloped part of the product. Currently, meat substitute producers use plant-based fats, which come with a smorgasbord of problems. Some, like cocoa butter or coconut oil, give the product an unwanted taste that needs to be masked with copious amounts of salt. Others, like palm oil, are unsustainable, or suffer from a much lower melting temperature than animal fats, leading to the fat melting out of the product when it is cooked.

The reason there are no cultivated animal fat products on the market comes down to a mixture of demand and technology, says Steele. ‘So far, growing fat cells has not been done cost-efficiently or at a larger scale,’ he explains. Traditionally, cells are cultured in vitro using fetal bovine serum, an unethical and expensive ingredient derived from the blood of cow foetuses. It is often added to culture media where the growth factors it contains work their magic. But its use is off limits for an industry trying to take animals out of the equation and Hoxton Farms had to be inventive to bypass it.

The way around it is bespoke mathematical modelling. Steele builds models that describe the entire bioprocess, from the stem cells at the start to the harvested fat at the end, and optimise every step meticulously. ‘Using this combination of skills that Max and I have, we were able to reduce the cost of the process and scale up the technology,’ he says.

Steele credits the success of Hoxton Farms to the fusion of different scientific disciplines that he and Jamilly represent. Friends since nursery school, the co-founders spent the last 25 years exploring different branches of knowledge. In 2019, Jamilly finished a PhD at the University of Oxford in which he used Crispr for cancer screening in leukemia patients. What seems far removed from growing fats actually focused on culturing mammalian cells on a large scale. Steele, meanwhile, followed a master’s degree in machine learning with a career in the technology industry.

Covid-19 turned into a push for the development of Hoxton Farms, a start-up the friends had nurtured a vision of for years. Demand for alternative protein sources was already skyrocketing: in 2019, the annual retail food market grew by 2.2%, but plant-based foods swelled by 11.4% in comparison, according to the Plant Based Foods Association. The crisis propelled the meatless trend even further, with US sales of plant-based meat surging 264% in the nine weeks up to May alone.

One reason for the push is the link between the pandemic and meat. A rise in intense and unsustainable farming, and the increased use and exploitation of wildlife are among trends driving the increasing emergence of zoonotic diseases like Covid-19, according to a July report from the United Nations Environment Programme and the International Livestock Research Institute.

But the crisis is also a sign of an unreliable food supply, says Jamilly, and as slaughterhouses closed, meatpacking plants became coronavirus hotspots, and as supermarket shelves went empty many consumers were forced to face issues in the meat supply chain for the first time.

The cultured meat industry is still in its infancy. Singapore recently became the first country to approve a cultured meat product for sale, in a move that was hailed as a landmark moment for the industry. While it is too soon for Jamilly and Steele to speak on the future scale of their business, they foster an ambitious goal of enabling the replacement of any meat product with plant-based alternatives. Their customers, they say, are desperate for a replacement of plant-based oils, which is currently holding back this goal.

‘Fat is the most important sensory component of the meat we eat,’ says Jamilly. ‘If you think about the most expensive cuts of meat out there, such as Kobe beef, they are priced because of their high fat content.’

A very young company, Hoxton Farms is just about to raise its first round of funding. Trials for the technology have been successful, Jamilly says but demurs on the details. ‘Suffice to say there is a lot more to come – watch this space.’

Meanwhile, initial signs of success are coming in quickly. Hoxton Farms won the food and drink category of the Royal Society of Chemistry’s Emerging Technologies Competition in 2020. This and some additional fundraising means the double-act can hire a team in London and build its own lab, with a view of taking their project beyond the R&D.

Financial numbers: Unknown as first round of funding is still outstanding