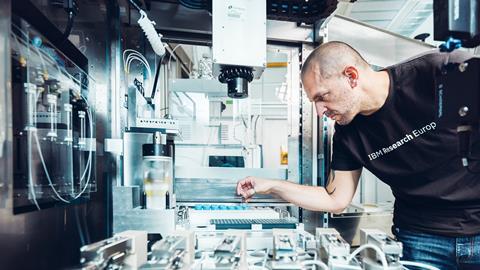 Researchers at the international computing giant IBM say that they have combined AI tools and cloud technology to allow people with minimal robotics knowledge to perform automated chemistry. Teodoro Laino at IBM’s Zurich, Switzerland, and colleagues used a dataset of chemical procedures built with their RXN neural network and integrated it with cloud-based control of an automated synthesis machine. The RoboRXN system can in principle allow researchers anywhere to make remote requests for the robot to do their reactions.

‘We basically connect users worldwide to our IBM central chemical platform, allow them to run our AI models and even run the recipes on a robot,’ comments IBM’s Matteo Manica. ‘This was the vision behind RoboRXN – bringing a chemical lab to your home.’ 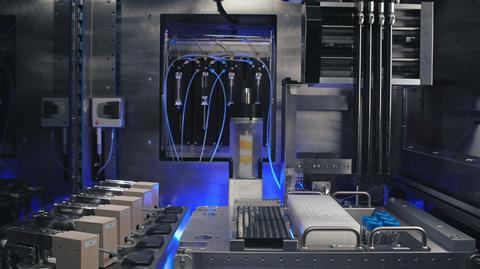 The synthesis robot receives instructions from a cloud-based platform, allowing chemists to run the robot from anywhere in the world

In a live demo on 26 August, RoboRXN chose a route for producing 3-bromobenzylamine, one of 3000 molecules the company had previously identified as potential COVID-19 therapeutic candidates. RoboRXN identified a synthetic route reducing 3-bromobenzonitrile using lithium aluminium hydride and produced instructions to tell a liquid-handling robot to do the preparation. ‘It’s something that even in a lab done by people is technically challenging, because they’re using reagents are actually incredibly sensitive to moisture,’ Laino explains. The robot quenched the reduction with brine before filtering it and analysing the solution with LC-MS. Within an hour, RoboRXN had made 3-bromobenzylamine. ‘With RoboRXN you don’t need to be located in the lab anymore,’ Laino tells Chemistry World.

IBM claims its RXN tool for retrosynthesis and reaction prediction outperforms all data-driven models on reaction prediction, picking the correct outcome with 90% accuracy. IBM researchers built the reaction dataset by extracting chemical information from patent text using an approach based on the artificial intelligence technique known as natural language processing, which they call Molecular Transformer. ‘The very first task is to understand reactions extracted by computers from text - it’s quite likely that these reactions are incorrect,’ Laino says. 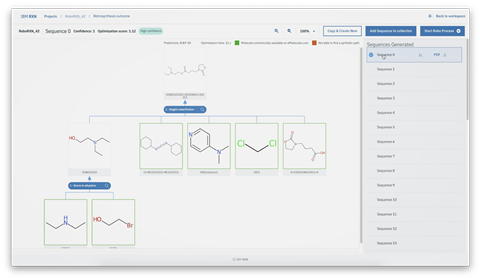 As such, IBM’s approach trains RXN’s neural network to assess reactions against the others it has learned, and forget those that are anomalous. In doing so, the researchers reduced an original nine million patent data set to the three million their current efforts are now based on. ‘The cleanup of the data is of course important for building more reliable and better performing reaction prediction models, retrosynthesis models and reaction procedure models,’ Laino explains. ‘It’s really an overarching effort.’

The power of AI

Using this information, RoboRXN produces the precise sequence of synthetic steps needed, along with a measure of confidence in the details extracted. ‘But you are free to change what’s recommended,’ comments Laino. This lends itself well to optimising chemical reactions, Laino tells Chemistry World. ‘You can start trying to steer your reaction towards the highest yield,’ he says. ‘This is simply optimisation on the top, it can be driven by an algorithm.’

Laino notes that few other computational chemistry systems currently covered in the media make such heavy use of neural networks. He mentions Chematica, the computer-aided retrosynthesis tool developed by the team of Bartosz Grzybowski from Ulsan National Institute of Science and Technology, South Korea, and the Polish Academy of Sciences, and now owned by Merck KGaA. Chematica ‘is a rule-based system that people have invested 20 years and a large amount of human resources into’. ‘Rule-based systems are not sustainable,’ Laino asserts. ‘RoboRXN automatically reviews the literature and checks its consistency.’

Cheminformatics consultant Wendy Warr says that RoboRXN’s key advance is the merging of three separate technologies: AI, robotics and the cloud. ‘You need the cloud if the chemist’s going to do the reaction remotely,’ Warr says. ‘If that works, it is a very powerful combination.’ She highlights that RoboRXN will likely still need a lot of manual intervention to prepare the materials used in the experiments and set up the robots. For Warr, the landmark of a tangible advance will be the day that ‘a genuine chemist’ uses it to publish in ‘a reputable journal’.

Laino stresses that the important developments are in RoboRXN’s cloud computing elements ‘that may be lightyears from organic synthesis, but are going to be key technological enablers for automating chemical labs in the future’.