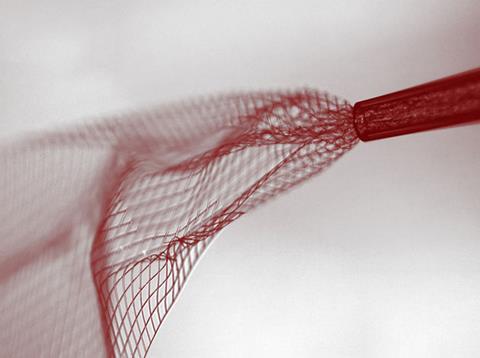 Flexible electronics have been created that unfold once injected into a biological tissue such as the brain. The US team behind this invention were able to use the mesh electronics to map brain activity in rodents paving the way for similar tests in humans. The work could lead to a new generation of biomedical and implantable electronics that can be easily introduced without damaging surrounding tissue.

Flexible electronics have been incorporated into both living and non-living 3D structures before. But as they have traditionally been continuous sheets and relatively rigid, they required an opening equal to their size in order to be implanted, which defeats many of the advantages of flexible electronics. Furthermore, the mechanical mismatch between traditional thin film flexible electronics and neural tissue frequently produced a chronic immune response.

Now, Charles Lieber’s lab at Harvard University has developed ultra-flexible electronics – around a million times more supple than state of the art flexible electronics – with a macroporous structure like chicken-wire and shown that it can be rolled up inside a syringe and injected into tissues and other 3D structures. Once injected, the electronic mesh, which can be up to 30 times the width of the needle, unfolds.

In previous work, Lieber’s group had shown that similar macroporous electronics made from biocompatible polymers could be used as a scaffold for tissue engineering in order to create tissue innervated with electronic sensors. They then wondered how they could deliver the electronics to existing tissue.

‘When releasing the mesh electronics from the fabrication substrate, we noticed that it was almost invisible and very flexible like a polymer and we could use a pipette to transfer from one solution to another,’ explains Lieber. ‘From there, we simply asked, would it be possible to deliver the mesh electronics by syringe-needle injection, a process common to delivery of many species in biology and medicine?’

To find an answer, the team designed and fabricated mesh-like electronics containing different sensors and electronic units on a 2D substrate by standard lithography. Since the substrate had a layer that dissolves in solution to release the mesh electronics, the electronics could subsequently be loaded into a syringe with metal or glass needles.

From there, the team injected piezoresistive electronics into polymer structures and were able to monitor mechanical strain, showing how this approach could track structural deficiencies in engineered materials. The team then injected electronics into the brains of live mice, which seamlessly integrated with the tissue while showing no immune response, and could reliably monitor brain activity.

‘Since no one had done this before, the fact that you could do such an injection – treating electronics as something like a reagent or drug – without damaging the circuitry or the targeted structures was really cool!’ says Lieber. Even months after the electronics were implanted in the brains of the rodents, the team saw no scar tissue or immune response. ‘This contrasts all work to date with larger and more rigid probes – it is a great result because it could be transformative for brain science and medicine.’

‘This work is truly exciting and represents a milestone in electronics,’ comments Tian Bozhi, who investigates bioelectronic systems at the University of Chicago, US. ‘There has been a clear trend of making electronics into flexible, stretchable and light-weight forms. However, realising an electronic system that can be injected into real tissues is extremely challenging because many aspects of devices need to be considered simultaneously, including but not limited to mechanical and electrical properties, tools for device manipulation and bio-integration.’

After injecting electronics into a specific mouse brain region, the team was surprised to observe neural cells regenerating and migrating into the mesh electronics. ‘The mesh electronics behaved as an excellent tissue scaffold consistent with our earlier in vitro tissue engineering work. We believe our injectable mesh electronics are thus good candidates for cellular therapy by co-injection of mesh electronics with stem cells, for example, in treatments of stroke and other neurodegenerative diseases,’ adds Lieber.