Ammonia-producing proteins from humble nitrogen-fixing soil bacteria could help flip humanity’s fertiliser consumption from a massive energy drain into a power generator, thanks to a biofuel cell that reacts atmospheric nitrogen with hydrogen.

Today’s dominant and energy-intensive Haber-Bosch process also uses nitrogen and hydrogen to make ammonia. But its conditions, at around 500˚C and 200 times atmospheric pressure, mean it contributes up to 3% of global carbon dioxide emissions. ‘We could do it at room temperature and ambient pressure while simultaneously producing small quantities of electrical energy,’ says Shelley Minteer from the University of Utah, US, whose team developed the fuel cell.

Most biological fuel cells focus on increasing electricity generation from oxygen and hydrogen or glucose. By contrast, Minteer’s team realised that they could use the nitrogenase enzyme to replace the oxygen with nitrogen. Nitrogenase hasn’t been exploited before partly because it degrades in oxygen. 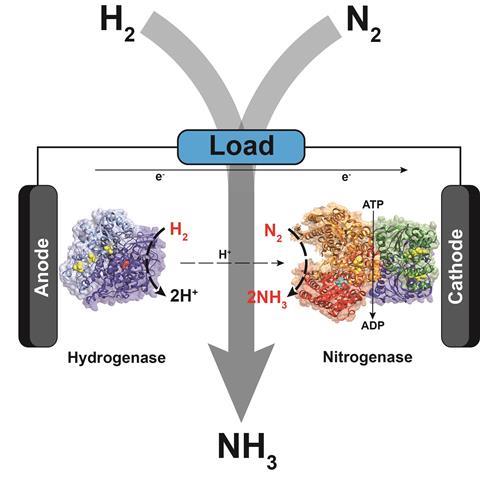 The ammonia-producing fuel cell exploits the hydrogenase enzyme to make protons, which nitrogenase uses to reduce nitrogen to ammonia

Having isolated the enzyme and kept it away from air, the researchers also faced the problem that electrons usually move slowly between enzymes and fuel cell electrodes. They therefore used methyl viologen to shuttle electrons in both compartments of their cell. In one compartment they put nitrogenase, nitrogen and a carbon paper electrode. The other, separated from the first by a membrane that allows only protons through, contained hydrogen, the enzyme hydrogenase that converts hydrogen to protons, and another electrode. The cell produced around five milligrams of ammonia for each milligram of nitrogenase, and passed 60 milliCoulombs of electrical charge between compartments.

Ammonia and power output can be continuous if the cell is kept supplied with its chemical fuels, which are hydrogen and the biological ‘energy’ molecule ATP. Eliminating ATP is an important hurdle to overcome, Minteer admits, which the group is working on.

They envision getting hydrogen from the same source as the current Haber-Bosch process, energy-intensive steam-reforming of methane. Minteer highlights that the energy their cell generates during the final step would reduce emissions during ammonia production. But she adds that her coauthors from CSIC, in Madrid, Spain, recently produced hydrogen using a photosynthesis protein and light. That could potentially erase ammonia’s carbon footprint altogether.

Producing the cell shows the team’s ‘deep understanding of the enzyme behaviour’, comments Katherine Holt from University College London. ‘The next question will be to improve enzyme stability and longevity for long-term use and to develop large surface area electrodes to allow for scale up.’