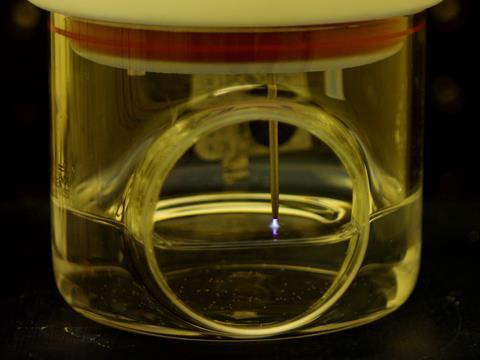 US researchers have invented a way to make ammonia, vital in producing fertilisers to feed Earth’s 7.7 billion humans, without relying on catalysts as today’s industrial methods do. The team, led by Mohan Sankaran and Julie Renner at Case Western Reserve University in Cleveland make ammonia electrolytically from water and nitrogen.

That’s not normally possible without a catalyst because nitrogen in its molecular form, N2, is extremely stable – but nature had already showed how it could be done. ‘When you have a plasma you can break N2 without the catalyst,’ Sankaran tells Chemistry World. ‘It’s done every day when you have lightning.’ Free electrons in lightning plasmas can break nitrogen molecules apart, but form nitrates and nitrites, not ammonia.

Today we make the ammonia we use through the Haber–Bosch process, which reduces gaseous nitrogen using gaseous hydrogen at the surface of a catalyst at high pressures and high temperatures. This energy intensive process uses around 2% of the world’s energy and requires hydrogen from fossil fuels, emitting climate-changing greenhouse gases.

Renner is an expert in electrochemical ammonia synthesis, which involves passing an electrical current through a liquid that contains a catalyst. Soon after joining Case Western Reserve in 2016 she met Sankaran, who studies what plasmas do at liquid surfaces, in a hallway, and the pair combined interests. Sankaran had shown that in such systems plasmas can form solvated electrons at liquid surfaces, which he calls ‘one of the strongest reducing species known in chemistry’.

Their electrochemical method passes current through water, using a nitrogen plasma as one of the system’s two electrodes. Other electrochemical ammonia synthesis methods produce hydrogen and ammonia at the same time, but at low currents the plasma-based approach made only ammonia.

While that’s a big benefit, the lightning-like method’s electricity consumption, which the researchers say is in terms of energy cost ‘considerably larger’ than the Haber–Bosch process, is a big downside. Yet the approach may still be useful as it is for making ammonia on small scales, says Renner. ‘We are also working on ideas to reduce the energy consumption,’ she adds.

Electrochemist Daren Caruana from University College London, UK, says the study is a great example of how plasma can be used for chemical transformation. ‘The chemistry described is rudimentary, but using free electrons from a plasma as a reagent can be a very powerful chemical tool to realise kinetically or thermodynamically stubborn reactions,’ he adds.

Likewise, Annemie Bogaerts from the University of Antwerp, Belgium, who researches producing ammonia from nitrogen using plasmas in the gas phase, describes the study as very interesting. ‘In my opinion, plasma has great potential for N2 fixation, because it operates based on electricity, can easily switched on and off, and is thus very promising in combination with renewable electricity.’