A new electrochemical process could cut the carbon footprint and start-up costs of producing ammonia. The researchers working on the project hope that it could one day offer people in developing countries cheap, environmentally friendly fertilisers.

Ammonia is an essential fertiliser ingredient, with more than 145 million tonnes made around the world each year. It is produced by the Haber–Bosch process – a method developed over 100 years ago that now consumes between 3–5% of the world’s natural gas. Ammonia production facilities are also enormously expensive, with upfront costs easily running into hundreds of millions of pounds.

A potential alternative approach is to reduce nitrogen to ammonia electrochemically. If an aqueous electrolyte is used, the solvent water itself can directly supply the hydrogen needed for the reaction. But attempts so far have suffered from low efficiencies, with the majority of efforts requiring metal-based electrodes that are often better at promoting the competing hydrogen evolution reaction than they are at reducing nitrogen.

Now, a team led by materials chemist Adam Rondinone at the Oak Ridge National Laboratory in Tennessee, US, has developed an electrochemical method to produce ammonia that overcomes this problem. Key to the technique is an electrode made of a heavily textured form of graphene that has been doped with nitrogen atoms. The material’s surface features an array of barbs around 50–80nm in length that the team calls ‘carbon nanospikes’. When used in an electrochemical cell, the carbon nanospike electrode drives the conversion of nitrogen gas dissolved within the electrolyte into ammonia. 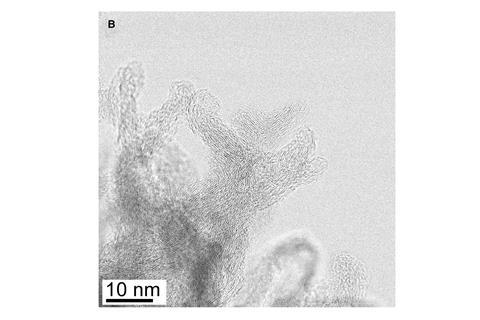 The team found that electrolytes containing smaller counter-ions increased the electric field at the tips of the carbon nanospikes, improving the efficiency of the ammonia synthesis – the reaction worked best when they used lithium perchlorate rather than sodium or potassium salts. The efficiency of the system is almost nine times greater than any previous example of ammonia reduction performed under similar conditions.

‘The electrochemical synthesis of ammonia is a field that is expanding massively at the moment, and this work takes a fresh approach to this problem that I am sure will get a lot of people thinking,’ says the University of Glasgow’s Mark Symes, an expert in electrochemistry who was not involved in the project. ‘These results are very exciting, because they show that the phenomenon whereby electric fields are enhanced at sharp points can be exploited to drive really demanding electrochemical reactions.’

Symes adds that in addition to nitrogen reduction, the work could have a ‘big impact’ on approaches to electrocatalysis more generally.

However, Rondinone notes that much work is still required before electrochemistry can challenge the Haber–Bosch process as a realistic means of producing ammonia commercially. ‘Another way of looking at this problem is by thinking about electric cars – batteries are electrochemical devices, and took many years to develop into a viable alternative for fossil fuels,’ he says. ‘We are reaching the point where electric cars will be preferred to gasoline for everyday commuting, but it was not a quick or cheap process getting here!’ He hopes that the path to large-scale electrochemical ammonia production can follow a similar route, but perhaps won’t take as long.

‘This is basic science, but if we are wildly successful then we might be able to develop this technology into an alternative means to produce ammonia using wind or solar power, and it might be better suited for developing regions that can’t afford a large and expensive Haber–Bosch plant,’ says Rondinone. ‘That means distributed production and independence for farmers. And we might do it with a lower environmental impact.’