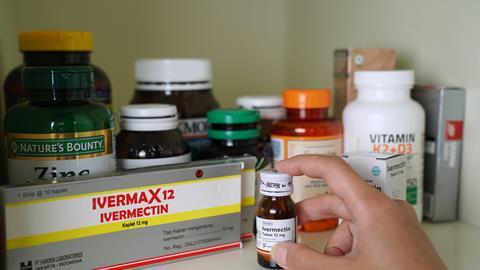 Evidence that anti-parasitic drug ivermectin can save lives in Covid-19 cases has gone up in smoke. Key studies have been deemed suspect or downright fraudulent.

Supporters of this anti-parasitic drug pointed to a meta-analysis from the University of Liverpool, which reported that the death rate in those taking ivermectin was 56% lower, but this is now rejected by those who led the study.

Now, a letter in Nature Medicine argues that summary data alone are not to be trusted for such studies. It proposes all individual patient data should be requested and personally reviewed. ‘The way we do meta-analyses is fundamentally broken, because we take individual trials on trust,’ says medical researcher Kyle Sheldrick at the University of New South Wales, Australia, who signed the correspondence.

He estimates that of the 18 randomised control trials about a third are either fake or not conducted as described. ‘There’s not a single randomised control trial which reliably says ivermectin saves lives,’ says Sheldrick. A key conclusion for him is that ‘trust is toxic in research’ and that starting from a position of trust ‘is one of the biggest things that needs to change’.

The letter highlight two suspect trials from Egypt and Iran. In the case of the Egyptian study, there are 600 patients with values where the last digit is rarely number three, notes Sheldrick. ‘You were 50 times more likely to have a result ending in eight, than three.’ 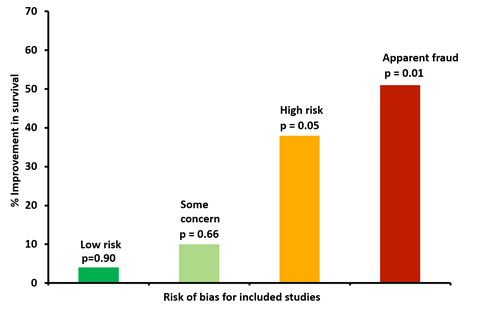 A risk of bias (ROB) analysis of studies in a meta-review of ivermectin’s effects on patient survival found that studies that suggested the drug was beneficial against Covid-19 were more likely to be fraudulent. The greater the statistical significance of the study, the more likely it was to be suspect

‘The thing that really shocked me and my co-authors is how much of it is deliberate fraud,’ says Sheldrick. ‘Things like the same 11 patients copied and pasted, over and over.’ In another example, hundreds of patients were supposedly recruited using complicated protocols in incredibly short time scales with a team of three.

Hill says his group followed the best practice guidelines for assessing bias. ‘There are safeguards to make sure the studies [in meta-analyses] are of good quality, but they don’t work if people lie in their replies to questions,’ says Hill. ‘I’ve worked on HIV for 30 years. We don’t get fraud. We get trustworthy doctors, from a whole range of countries.’

‘The people who’ve done these meta-analyses haven’t stuffed up,’ Sheldrick says. ‘They haven’t deviated from accepted standards or made big mistakes.’ Instead, there is a fundamental flaw in the approach, and investigators need to ask those running trials to send them their data, the letter states.

‘Any study for which authors are not able or not willing to provide suitable anonymised [individual patient data] should be considered at high risk of bias for incomplete reporting and/or excluded entirely from meta-syntheses,’ the letter notes. There may, however, be difficulties in obtaining patient data from government agencies, and pharmaceutical companies may want to retain it as part of their intellectual property.

The fraud has had repercussions, with people against or concerned about Covid-19 vaccines resorting to what is an unproven treatment. Some even took ivermectin intended for horses. Moreover, proponents of ivermectin on social media platforms have suggested unusually high doses.

‘Some recommend 3000µg of ivermectin over five days,’ notes Sheldrick, who says Australia has some experience with prescribing this drug for parasitic infections such as scabies. ‘That is 20 times what we give for river blindness, where we give a single dose of 150µg.’

Meanwhile, large-scale clinical trials such as Remap-Cap, which evaluates multiple repurposed interventions, are continuing and may yet show a benefit from ivermectin. But for now, there is no evidence showing that it works for Covid-19, and strong evidence for many early trials being untrustworthy.