Life of grime for atmospheric chemistry

Atmospheric chemists from Canada have discovered that grimy surfaces on city buildings and windows may be releasing ozone precursors into the atmosphere when exposed to sunlight. The work may challenge the current scientific consensus, as urban grime was widely assumed to trap nitrogen oxide compounds and not liberate them.

Dirty windows and buildings are a common site in bustling city centres, with pollutants from cars and industrial centres blackening city architecture. But surprisingly little is known about how these compounds interact when captured on surfaces.

‘The chemistry part has been largely overlooked,’ said James Donaldson from the University of Toronto, speaking at the 250th ACS National Meeting & Exposition at Boston, US. ‘It’s mainly been composition and mainly in the context of understanding how windows get dirty and how buildings get degraded.’

According to Donaldson, the chemical community agree grime is a sink for nitrogen oxides, which stimulate the production of ozone, and means they can’t participate in urban atmospheric processes. ‘The nitrate on these grime surfaces is presumably being deposited as N2O5 or ammonium nitrate or nitric acid,’ he explained. ‘Therefore, we’re essentially removing nitrogen oxides from the tropospheric cycle.’

The idea that these airborne nitrate particles may be landlocked to surfaces is what inspired Donaldson and his colleagues to carry out a rather simple field study. ‘Our interest in this particular field study was to – at the same place, at the same time – compare particles and grime surfaces,’ said Donaldson. 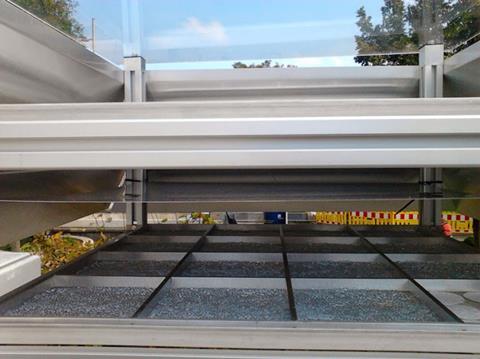 Over six weeks, the team collected grime from two sample surfaces in Leipzig, Germany, which contained glass beads to both simulate a window and increase the surface area for capture. One surface was directly exposed to sunlight, while the other was placed underneath to capture grime in the shade. They also recorded the number and type of particles in the air.

The researchers quickly noticed that the levels of ammonium and nitrates in the grime samples were substantially lower than those detected by the air sampler. Donaldson suggested this may be a result of sunlight stimulating the evaporation of ammonium nitrate.

But the interesting result came when comparing the illuminated and shaded grimes directly. ‘In the light, there is less nitrate than there is in the dark,’ said Donaldson.

The result suggests that sunlight is liberating nitrogen compounds from the grime, and is backed up by previous laboratory work carried out by Donaldson and his colleagues in Toronto. Urban grime was captured by the team and exposed to artificial sunlight to determine whether the nitrogen compounds escaped the surface.

‘We turn the light on … [the nitrate] goes away,’ explained Donaldson. ‘It turns out to go away really, really fast – 10,000 times faster than it does in aqueous solution.’

Using UV spectrometry, the researchers also identified nitrous acid to be the main compound emitted. This may help to explain why some atmospheric chemists have identified elevated levels of the acid within aerosols in major cities in the past.

Christian George, an atmospheric chemist from the Institute of Research on Catalysis and Environment, France, believes the impact of this work could be significant. ‘This challenges the current knowledge and will have to be taken into account in upcoming simulations of the air quality in urban centres,’ he tells Chemistry World.

V. Faye McNeill from Columbia University, US, agrees with George’s sentiment and is intrigued how such interactions will play out on other surfaces. ‘It will be interesting to see whether these reactions occur on other environmental surfaces such as aerosol particles as well,’ says McNeill. ‘The more reactive the surface area, the greater the potential impact of these processes on air quality.’