A genetically-edited rice plant produced can return more of the vital nutrient phosphorus to the soil than conventional varieties.1 This offers several benefits, ranging from lower food prices to healthier fish stocks.

Phosphorus is an essential component of DNA, RNA and numerous other chemicals synthesised by all living organisms. To increase crop yields, farmers usually apply phosphate fertiliser every year. Cereals such as rice have evolved to divert most phosphorus to the grain. ‘In the time without phosphate fertiliser, phosphorus was very low,’ explains Jian Feng Ma of Okayama University in Japan. ‘So plants needed to divert this limited phosphorus to the grain for the germination and early growth of the next generation.’ Unfortunately, if the grain is harvested and eaten, the phosphorus is removed from the soil, requiring more phosphate fertiliser – a non-renewable resource mined from phosphate rock – and increasing the rice’s cost. Plants principally store phosphorus in the form of phytate salt, which humans and some farm animals cannot digest and therefore excrete. Excreted phosphorus often enters waterways, causing excessive growth of algae. When these algae die, their decomposition lowers oxygen levels in the water, killing fish and reducing biodiversity. 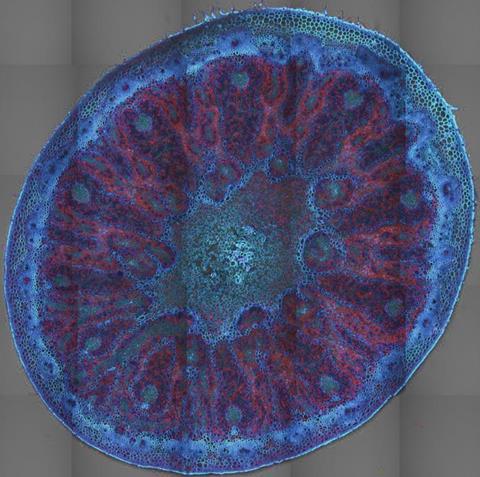 Expression of the phosphorus directing gene in the stem of a transgenic rice plant is highlighted using green fluorescent protein. Rice plants that direct phosphorus to their leaves and stems could help farmers to use less fertiliser

Modifying cereal grains to lower their phosphorus levels is, therefore, of interest to farmers and agribusiness. ‘People have tried for many years to reduce the concentration of phytate in barley and maize, but they haven’t got good results,’ says Ma. ‘If they knock out some genes involved in phytate synthesis, they can reduce the concentration of seed phytate but, on the other hand, they also have a negative effect on the growth and yield.’

In the new research, Ma and colleagues found that a gene in rice transports phosphorus towards developing shoots and seeds. They produced multiple mutant versions of rice with this gene silenced and grew them alongside the wild type. Whereas the wild-type rice diverted almost 65% of the phosphorus taken up into the seeds, the mutant versions all diverted less than 45%. The remaining phosphorus ended up in the leaf and stem material, which is composted and returned to the soil after the grain is harvested. Crucially, in most cases yields were not significantly affected.

‘It’s a very important problem and this represents a significant advance,’ says Victor Raboy of the US Department of Agriculture’s Agricultural Research Service in Idaho. Raboy questions Ma’s assertion, however, that previous approaches to reducing seed phosphorus had been restricted to preventing plants’ phosphorus uptake. ‘That’s one of the approaches people have taken, and that has [reduced yields],’ he says. He notes, however, that, in 1998, his own group produced a mutant strain of barley that combined low seed phosphorus with good yield by random chemical mutation of the barley genome2, and in 2011 Chinese and Australian researchers proposed that this was because of a mutation in a gene of the same family as that targeted by the present researchers.3 ’We’ve not only published one very thorough field study, but we’ve also released cultivars of barley with that gene for farmers to produce that have good yields,’ says Raboy. ‘The major findings in this Nature paper are largely confirmatory, not novel.’